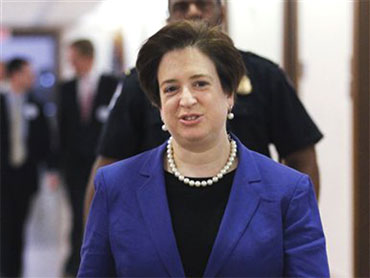 The White House has released excerpts from Supreme Court Nominee Elena Kagan's opening statement to the Senate Judiciary Committee. Kagan is expected to speak late this afternoon, following opening statements from members of the committee on this, the first day of her confirmation hearings.

With Republicans expected to cast Kagan as a liberal judicial activist, she plans to push back by pointing to her view of the Supreme Court as a place for "even-handedness, principle, and restraint."

She also stresses that she won't treat anyone better or worse than anyone else because of their background or beliefs, and says the Court is a "modest" institution that has to be "deferential to the decisions of the American people and their elected representatives."

If confirmed, she says, she will come at cases with an "open mind" and "do my best to consider every case impartially, modestly, with commitment to principle, and in accordance with law."

"Mr. Chairman, the law school I had the good fortune to lead has a kind of motto, spoken each year at graduation. We tell the new graduates that they are ready to enter a profession devoted to "those wise restraints that make us free." That phrase has always captured for me the way law, and the rule of law, matters. What the rule of law does is nothing less than to secure for each of us what our Constitution calls "the blessings of liberty" - those rights and freedoms, that promise of equality, that have defined this nation since its founding. And what the Supreme Court does is to safeguard the rule of law, through a commitment to even-handedness, principle, and restraint.

"The idea is engraved on the very face of the Supreme Court building: Equal Justice Under Law. It means that everyone who comes before the Court - regardless of wealth or power or station - receives the same process and the same protections. What this commands of judges is even-handedness and impartiality. What it promises is nothing less than a fair shake for every American.

"[T]he Supreme Court is a wondrous institution. But the time I spent in the other branches of government remind me that it must also be a modest one - properly deferential to the decisions of the American people and their elected representatives. What I most took away from those experiences was simple admiration for the democratic process. That process is often messy and frustrating, but the people of this country have great wisdom, and their representatives work hard to protect their interests. The Supreme Court, of course, has the responsibility of ensuring that our government never oversteps its proper bounds or violates the rights of individuals. But the Court must also recognize the limits on itself and respect the choices made by the American people."

"I've led a school whose faculty and students examine and discuss and debate every aspect of our law and legal system. And what I've learned most is that no one has a monopoly on truth or wisdom. I've learned that we make progress by listening to each other, across every apparent political or ideological divide. I've learned that we come closest to getting things right when we approach every person and every issue with an open mind. And I've learned the value of a habit that Justice Stevens wrote about more than fifty years ago - of 'understanding before disagreeing.'

I will make no pledges this week other than this one - that if confirmed, I will remember and abide by all these lessons. I will listen hard, to every party before the Court and to each of my colleagues. I will work hard. And I will do my best to consider every case impartially, modestly, with commitment to principle, and in accordance with law."

Senate Republican Leader Mitch McConnell has also released excerpts of his planned remarks. He plans to say Kagan "has spent much of her adult life not steeped in the practice of the law but in the art of politics."

McConnell goes on to complain that Kagan worked for the Michael Dukakis presidential campaign to attack Republicans and a policy advocate for President Clinton "looking for ways to advantage Democrats over Republicans."

"If you believe the role of a judge is to be an impartial arbiter, these things can't be ignored," he plans to say. "Indeed, members of both parties should appreciate the importance of confirming judges who are more interested in what the law says than in how the law can be used to advantage any one individual, party, or group. It's to no one's advantage if judges can't be expected to rise above politics."