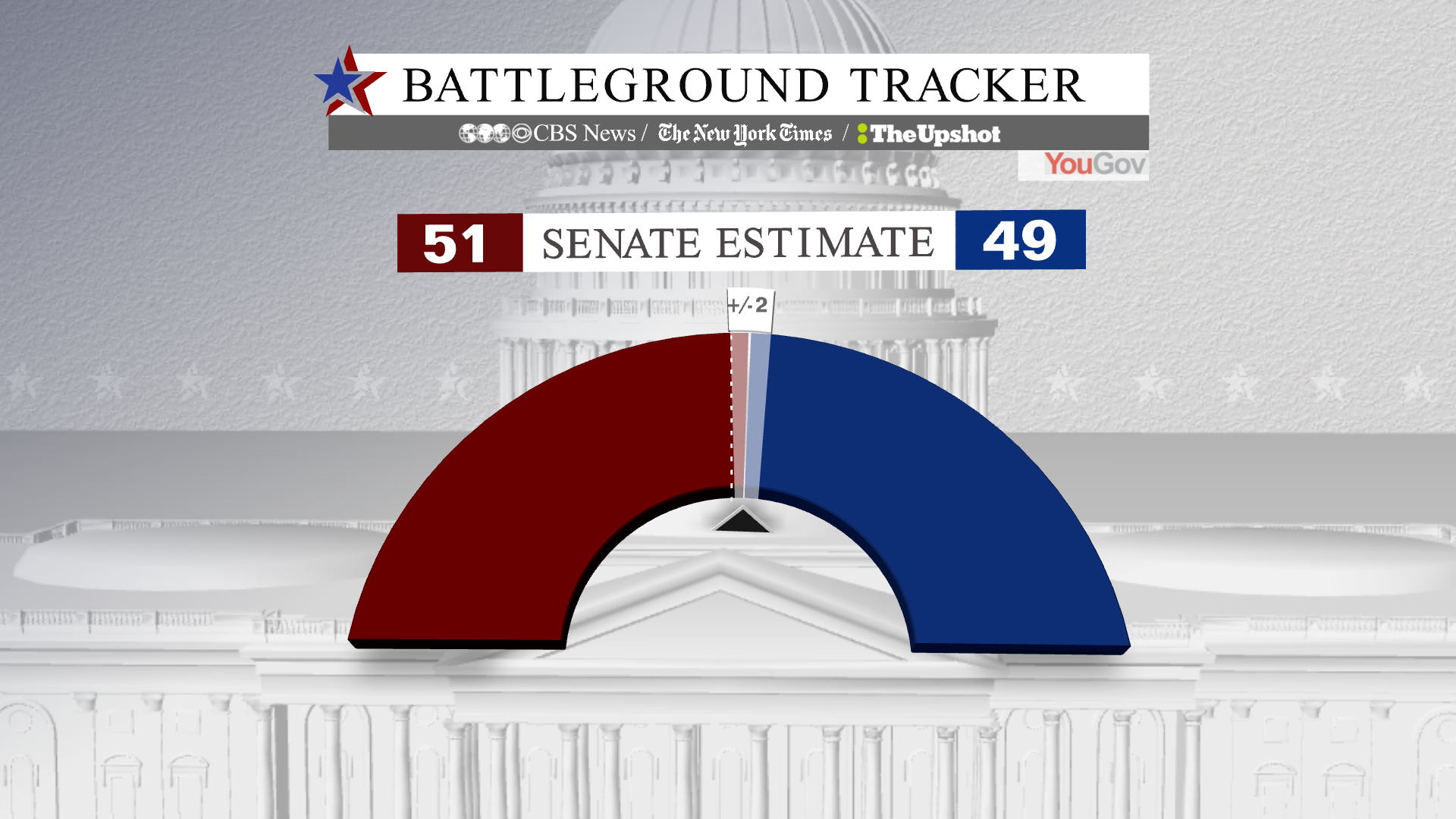 If the midterm elections were held today, we might all be in for a late night.

Republicans remain more likely to control the Senate, but that estimate is underpinned by very tight races throughout.

Many key Senate battleground contests in our latest Battleground Tracker model show just a point or two separating the Democrats and Republicans, and all the leads for either side remain in single digits. Our new simulation keeps the most likely Senate outcome at a 51-49 GOP majority if the election were held today, as Republicans benefit from having many paths to get to that 51 or beyond.

Democrats keep things close by benefiting from a large gender gap - leading among women in every battleground Senate race and by double-digits in most - and with leads among moderate voters even in the most conservative battlegrounds states. Republican candidates have done well shoring up their bases, but their test heading into the fall campaign season is whether they can add enough undecided voters (of which there are plenty) if they're to fully capitalize on a favorable national environment.

They haven't yet. In fact, while they hold a better-than-even chance to get the majority, the likelihood of a specific 51-seat Republican win is only a little more than a 50-seat Democratic hold.

In the southern states that Republicans have long eyed for pickups, the GOP remains up and would likely win - albeit narrowly - against Democratic incumbents Mary Landrieu in Louisiana and Mark Pryor in Arkansas, if today were Election Day, though these remain single-digit races in states that the President lost by double-digits in 2012. The same goes for one of the marquee matchups in the battleground state of North Carolina, where challenger Thom Tillis keeps a small lead over incumbent Kay Hagan.

There have been a few lead switches from last month, but all are relatively small shifts with very close estimates. In Iowa Democrat Bruce Braley is up narrowly over Republican Joni Ernst, a slight flip from a few weeks ago when Ernst was narrowly up. Alaska's estimate now has a Republican lead for Daniel Sullivan, perhaps helped by consolidating the GOP vote after the primary season, but the race estimate remains within the margin of error.

Republicans keep their leads in two states the Democrats are trying to gain seats of their own: against minority leader Mitch McConnell in Kentucky, and in the open seat in Georgia Democrat Michelle Nunn trails, but is within striking distance, of Republican David Perdue.

Those leads and the large number of competitive seats, coupled with the fact that Republicans are all but assured of three pickups (West Virginia, South Dakota, and Montana) out of the six total they need, means the simulation of Senate outcomes continues to favor the GOP.

This chart shows the results of the simulation using the state estimates. Red bars denote a Republican-led Senate.

Note also that the Senate race in Kansas was thrown a curve late this week when the Democratic candidate decided to leave the race, leaving incumbent Pat Roberts facing well-funded independent candidate Greg Orman. This round of the Tracker collected data before that occurred. Going forward, the political analysis suggests the state may be competitive between Roberts and Orman.

Democrats - who are stressing women's issues as part of their campaign strategies, hold a lead among women in all the battleground states, including places where they trail, which is helping keep things close in many places.

Democrats also have at least a 17-point lead among self-identified moderates in all these states, though that isn't quite enough up against lopsided tallies for Republicans among the conservatives who dominate in the southern states.

Republicans will try to "nationalize" the races and make them about the President, whose national approval ratings remain below 50 percent in the polls. In many of the races - especially those where Republicans are doing better - most voters do consider their midterm congressional vote to be a show of opposition to the administration and its policies. Places where less than half do tend to be more reliably Democratic states, and may be states where Democrats won't be affected by the links.

There are six battlegrounds - New Hampshire, Michigan, Iowa, Colorado, Georgia and North Carolina - where less than half of likely voters say their midterms vote will be cast against the Presidential Administration (though he isn't on the ballot) whereas there are four - Alaska, Louisiana, Arkansas and Kentucky - where most voters say theirs will be a vote against the President. In all of those four, Democrats are down.

In many of the races, voters leaning to one candidate (who are included in the estimates here) split fairly evenly.

And with many of these campaigns already going full force through the summer, voters say they are being exposed to ads: on average three-fourths in battleground Senate states say they've seen campaign ads.

Data in the second wave of the New York Times/CBS News Battleground Tracker are based on online interviews with 108,725 voters conducted August 18-September 2, 2014, in all 50 states and 435 Congressional districts across the United States.

YouGov, of Palo Alto, Ca., assembled the panel of registered voters, and conducted the selection, interviewing and tabulation. All 107,623 respondents in the first wave were recontacted and 68,974 were re-interviewed for this wave. In addition, 39,751 new panelists were added for the second wave. All panelists have previously opted-in to a YouGov or other online survey panel.

In each state and district, respondents were selected to match the demographics of registered voters. In 66 competitive House districts and the 15 smallest states with Senate elections this year, YouGov interviewed disproportionate numbers of voters to increase the sample size for these races.

The reported "margin of error" is an estimate, based upon a statistical model of the variability that would result theoretically from repeated applications of the same procedures. The practical difficulties of conducting any measure of public opinion may introduce other sources of error. More information about the methodology and data is available at the yougov.com website.

How the GOP could shake up U.S. energy policy
More
Anthony Salvanto