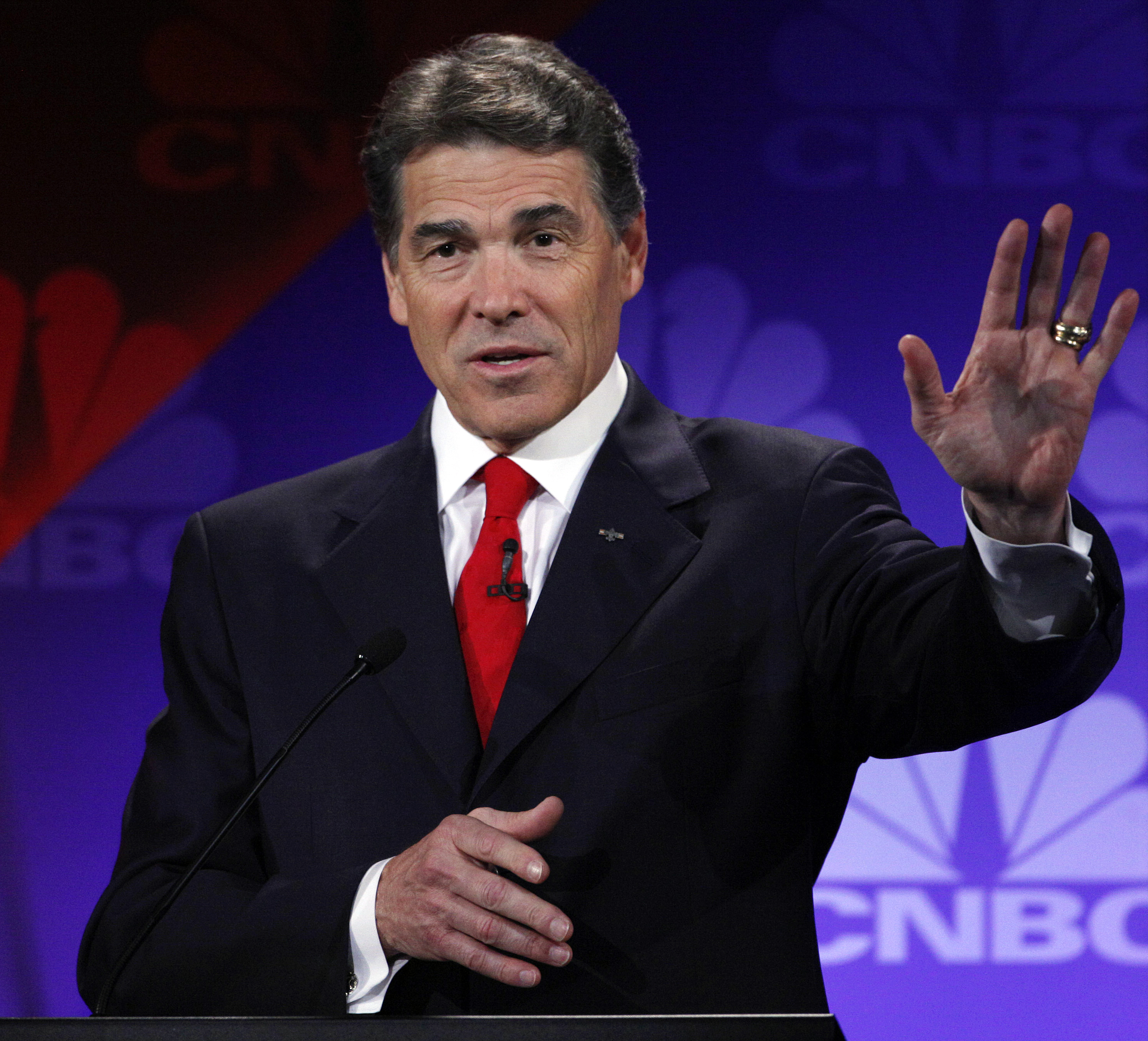 Wednesday night's CNBC presidential debate may well have given us the most memorable moment of any debate in quite a long time - Rick Perry's potentially calamitous inability to name the third federal agency he is vowing to abolish. It was like watching a car crash live on television. The game-changing moment has ramifications for all the presidential contenders, but it wasn't the only takeaway from Wednesday night. Below, our take on who's up and whose down in the wake of the debate:

Mitt Romney: The Republican presidential race has officially become Mitt Romney's to lose. Though the polls suggest Herman Cain is a more significant rival, political insiders knew Perry was a bigger threat - he, unlike Cain, has a serious campaign apparatus and the money to keep contesting the race into March. And now, thanks to his possibly disastrous brain freeze Wednesday night, Perry may well be finished. That leaves Romney without a serious rival for the nomination - and will give him more leeway to shade his rhetoric toward the general election, not the GOP primary fight. (At left, Brian Montopoli breaks down the debate on CBS' "Up to the Minute.")

Charged with inconsistency, Romney points to his marriage


Newt Gingrich: Gingrich almost made it into the loser column thanks to his apparent inability not to seem nasty, and his claim that he was paid by Freddie Mac as a "historian" - not a lobbyist - was hard to swallow. But Gingrich also had some nice moments, and his smartest-guy-in-the-room shtick seems to be resonating with a growing slice of the GOP electorate. Plus, Gingrich sits at third in the polls, and in light of Perry's difficult night at the podium and Cain's sinking prospects, he may find himself taking over the anti-Romney slot almost by default.

Michele Bachmann and Rick Santorum : About that anti-Romney slot: Social conservatives are desperate for a candidate to coalesce around to counter a frontrunner they don't trust, and Perry's mega-gaffe could prompt them to give a serious second look to Bachmann and Santorum. Both turned in solid performances, particularly Santorum, who created a forceful contrast with his rivals on the topic of government bailouts. If either of these candidates can convince social conservatives that they're the horse to bet on, they have a real shot at taking the Iowa caucuses in January.

Rick Perry: What can one even say? Rick Perry provided a YouTube moment that will be talked about for years, and it may well be impossible to overcome. To fail to name the third government agencies that you yourself are vowing to eliminate - and to suffer that horrible awkward silence before admitting as much - is to announce to the electorate that you not ready for primetime. With one brain freeze, Perry seriously damaged his fundraising ability, prompted a coming flood of "is Rick Perry finished" stories and simply embarrassed himself in front of a national audience.

Herman Cain: It's hard to imagine what Cain could have done to change the conversation about his candidacy, which has been engulfed by sexual harassment charges. But he didn't do it. Cain brought no new ideas Wednesday night that might have helped him change the conversation, instead once again focusing on his 9-9-9 plan, which he mentions so often that the audience now laughs in anticipation of his bringing it up. On the plus side for Cain, Rick Perry at least diverted some attention from his troubles, and the audience's reaction to a question posed to Cain about the scandal - it was roundly booed - shows he still has the support of many conservatives. But the harassment story isn't going away, and Cain doesn't seem to have a new trick up his sleeve to shift the focus, and it looks like 9-9-9 just isn't going to cut it any longer.

Jon Huntsman: Huntsman's only real shot at the nomination is a collapse by Romney, since their candidates are essentially predicated on the same argument to Republican voters: You may be skeptical thanks to my moderation, but I'm your best bet to win next November, so you better get over it. Yet Romney didn't seriously stumble, leaving Huntsman in the same place he was going into the debate: On the outside looking in during a presidential cycle in which his campaign simply doesn't seem to fit.

Ron Paul: As always, Ron Paul was a strong voice for his libertarian beliefs. Too bad the Perry disaster means nobody's going to be paying much attention. A debate free of dramatic moments would have allowed for more discussion of the ideas bandied about in a debate focused on the economy and been a prime opportunity for Paul to make his case against the Federal Reserve and big government. It looked for the first hour or so that's exactly what was taking place. Then came the YouTube moment to end all YouTube moments, a screw-up so memorable that substance couldn't possibly compete.

Cain blasts "character assassination" against him

Charged with inconsistency, Romney points to his marriage