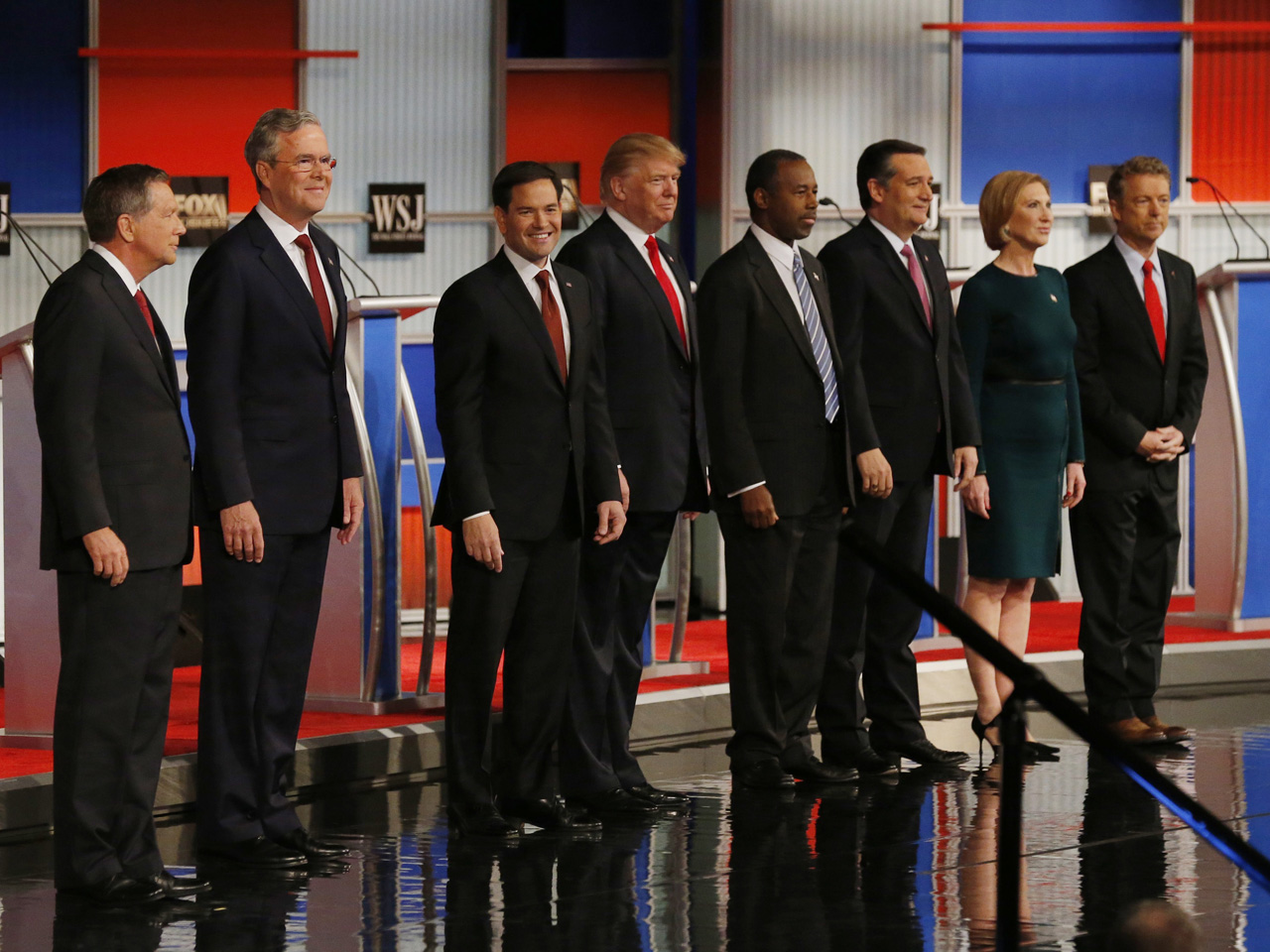 After three previous debates that focused largely on the personalities in the Republican presidential field, the candidates in Wednesday night's debate had an opportunity to stake out some clear policy positions.

Sens. Marco Rubio of Florida and Rand Paul of Kentucky stood out among the eight candidates for their strong -- but distinctly different -- views on what conservative leadership looks like. Policy differences emerged on a range of issues, from taxes to foreign policy.

"We're the richest, freest, most humanitarian nation in the history of mankind. But we also borrow a million dollars a minute," Paul said in his closing remarks at the Milwaukee, Wisconsin debate, hosted by Fox Business Network and the Wall Street Journal. "Can you be a fiscal conservative if you don't conserve all of the money? If you're a profligate spender, you spend money in an unlimited fashion for the military, is that a conservative notion? We have to be conservative with all spending, domestic spending and welfare spending."

Though he didn't get as much speaking time as some other candidates on stage at the debate, Paul had more of an opportunity than he has had in previous debates to clearly explain his libertarian-leaning views. He presented the greatest contrast to Rubio, who forcefully laid out a vision of conservatism based on family-focused social values and a robust military defense.

"The most important institution in society is the family," Rubio said, explaining his proposed expansion of child tax credits, which could cost $170 billion a year, according to the Tax Foundation. "You can't have a strong nation without strong values, and no one is born with strong values."

He defended his "pro-family tax code," noting that in 35 out of 50 states, childcare costs more than college. "So yes, I have a child tax credit increase, and I am proud of it."

Rubio and Paul also sparred over foreign policy, with the Kentucky senator questioning, "How is it conservative to add $1 trillion in military expenditures?" He added, "I want a strong military defense, but I don't want us to be bankrupt."

Rubio countered that "we can't have an economy if we're not safe."

"I know the world is a safer and a better place when America is the strongest military power in the world," he said.

Sen. Ted Cruz of Texas attempted to offer "a middle ground" on the issue by proposing to pay for a strong military by cutting corporate subsidies -- specifically sugar subsidies. The pitch is sure to appeal to the tea party voters who catapulted him to Washington in 2012.

Former Hewlett-Packard CEO Carly Fiorina had her most impressive moment when discussing foreign policy, giving a thorough rundown of her proposed approach to relations with Russia.

"We should not speak to people from a position of weakness," she said, explaining why she wouldn't communicate with Russian President Vladimir Putin "for a while."

Instead, she said, "I would start rebuilding the Sixth Fleet right under his nose," as well as "very aggressive military exercises in the Baltic states... I might also put in a few more thousand troops into Germany, not to start a war, but to make sure that Putin understand that the United States of America will stand with our allies."

Fiorina and most other candidates on the stage, aside from Paul, agreed the U.S. should implement a no-fly zone over Syria.

While Paul's libertarian-tinged views typically make him the outlier in the GOP field, Ohio Gov. John Kasich stood apart in some moments of Wednesday night's debate due to his more pragmatic take on some issues.

For instance, front runners Donald Trump and Ben Carson both said flatly that they would not raise the minimum wage, arguing it would depress the job market. Rubio gave a somewhat evasive answer that focused more on alternative ways to stimulate the economy. Kasich, meanwhile -- perhaps speaking to the general electorate and not just the GOP base -- showed some sympathy for those looking for higher hourly wages.

In Ohio, "we do have a moderate increase in the minimum wage," he said. "My father carried mail on his back. His father was a coal miner, he died of Black Lung....An economic theory is fine, but you know what? People need help."

Kasich similarly attempted to take a measured approach to the question of whether the government should bail out a failing bank. His response was a dud with the debate audience, clearly averse to the idea of bank bailouts.

"I would not let the people who put their money in there all go down," Kasich said. Cruz challenged Kasich on the matter: "So you would bail them out."

Kasich responded, "No. As an executive, I would figure out how to separate those people who can afford it versus those people, or the hard-working folks who put those money in those institutions."

Kasich's response was met with loud boos from the audience, but he continued. "When you are faced... with banks going under, and people, people who put their life savings in there, you got to deal with it. You can't turn a blind eye to it."

During an argument over foreign policy, Trump was booed again when he said of Fiorina, "Why does she keep interrupting everybody?"

Both Trump and Carson appeared out of their depth in the policy-heavy debate. However, the substantive nature of the debate may have worked to Carson's advantage by keeping questions about his biography mostly out of the discussion.

When asked whether he's concerned the questions will hurt his campaign, Carson answered, "Well, first of all, thank you not asking me what I said in the 10th grade... The fact of the matter is, you know, what -- we should vet all candidates. I have no problem with being vetted. What I do have a problem with is being lied about and then putting that out there as truth."