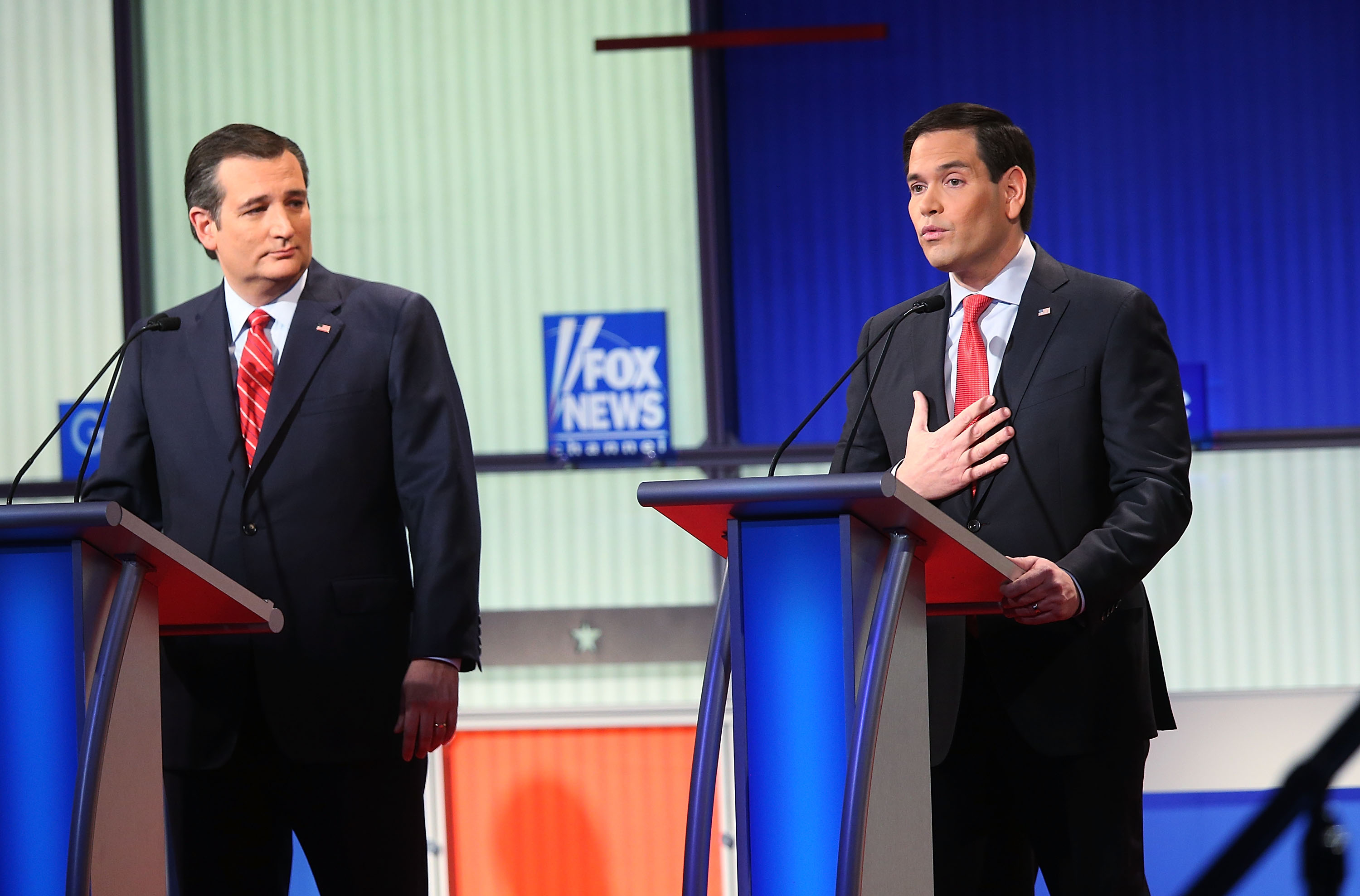 With Republican front runner Donald Trump absent from Thursday night's GOP debate -- the final one before the Iowa caucuses on Monday -- seven other candidates had a chance to stand in the spotlight, unfettered by Trump's shadow.

For some of the candidates on the Des Moines stage, that meant an opportunity to talk more about policies that highlight their strengths as candidates. Sen. Rand Paul, for instance, made the compelling case that he's been a leader on criminal justice reform. Ohio Gov. John Kasich highlighted his work in Ohio improving services for the mentally ill without stressing his state's budget.

But for the two candidates most closely trailing Trump -- Sens. Ted Cruz and Marco Rubio -- the spotlight had them sweating a bit. Naturally, as the two most popular candidates on stage, the Fox News debate moderators and the other debate participants honed in on Cruz's and Rubio's vulnerabilities. They also turned on each other -- particularly on the issue of immigration.

The immigration debate started with Paul charging that Cruz has an "authenticity problem" when it comes to his position on "amnesty," since the Texas senator once backed a path to legalization for undocumented immigrants.

Cruz tried to explain his stance during the 2013 immigration debate: "I introduced a series of amendments, each designed to fix problems in the bill," he said defensively. "The fact that each amendment didn't fix every problem didn't mean that I supported the rest of the bill."

That gave Rubio an opportunity to attack -- and invoke the controversial front runner: "You want to trump Trump on immigration," he said to Cruz. "This is the lie that Ted's campaign is built on, and Rand touched upon it: That he's the most conservative guy and everyone else is a RINO ("Republican In Name Only"). The truth is, Ted, throughout this campaign, you've been willing to say or do anything in order to get votes."

The bickering over legislative amendments gave New Jersey Gov. Chris Christie an opportunity to cast Rubio and Cruz as demonstrative of all that's wrong with Washington.

"This is why you need to send someone from outside of Washington to Washington," Christie said to applause. "I feel like I need a Washington-to-English dictionary converter, right?... This is what makes a difference when you're a governor. You can change your mind. Ted can change his mind. Marco can change his mind. It's perfectly legal in this country to change your mind. But when you're a governor, you have to admit it. You can't hide behind parliamentary tricks."

While Cruz was fending off attacks from Paul, Rubio's record on immigration came under attack from former Florida Gov. Jeb Bush. The former governor slammed Rubio for abandoning his bipartisan effort to pass comprehensive immigration reform.

"When you led the charge with the Gang of Eight, I supported it because you asked me to. I think it's important for people in elected office to try to forge consensus to solve problems," he said. "There's never going to be a perfect bill. But when you didn't do that, and you ask people to support, you shouldn't cut and run. You should stick with it. And that's exactly what happened. He cut and run. And that's a tragedy because now it's harder and harder to actually solve this problem."

Paul, back on the main debate stage after previously being relegated to the "undercard" debate, kept up his attacks on Cruz. The Kentucky senator critiqued his Texas colleague's record on two key issues for libertarians: the "audit the Fed" bill and National Security Administration (NSA) surveillance.

"What's interesting about where that liberty vote goes that my father brought to the Republican Party is, I don't think they're necessarily going to go for Ted," Paul said. "You know, Ted didn't show up. We had an audit-the-Fed vote... Ted didn't have time to show up. He was the only Republican that didn't show up for it... The NSA is another big issue. Ted said he was for NSA reform, but then he told Marco Rubio, 'No, no, no, I voted for the bill because I'm for the government collecting 100 percent of your cell phone records.' I don't think Ted can have it both ways."

Cruz explained he skipped the "audit the Fed" vote since it had no chance of passing and he had a prior commitment.

The Texas senator opened the debate by chiding Donald Trump's unwillingness to answer tough questions. However, not much later, Cruz complained to the moderators that he was coming under too much scrutiny -- prompting boos from the audience. He awkwardly joked, "Gosh, if you guys ask one more mean question I may have to leave the stage."

As the senators on stage parsed each others' records, Gov. Kasich and retired neurosurgeon Ben Carson followed Christie's lead, spurning the petty politicking of Washington.

"I will gladly confess that I'm the only one on this stage with no political title," Carson said. "You're not going to hear a lot of polished political speech from me, but you will hear the truth. And I don't think you have to be a politician to tell the truth."

The doctor added, "I've had more 2 a.m. phone calls than everybody here put together, making life and death decisions, putting together very complex teams to accomplish things that have never been done before."

"I've been a reformer all of my career," he declared, "fighting to reform welfare, fighting to reform the Pentagon, also being in a position to balance the budget, because that is very, very hard to do. And then in Ohio, of course, I had to bring about big reform, again, because we were so far in the hole. And now we just found out we are up over 400,000 jobs since I took over as governor."

Creating a contrast with bombastic candidates like Trump, Kasich said, "We cannot fix things in this country -- the Social Security, the border, balancing the budget, getting wages to grow faster -- unless we lead as conservatives, but we also invite people in from the other party. We have to come together as a country. And we have to stop all the divisions."