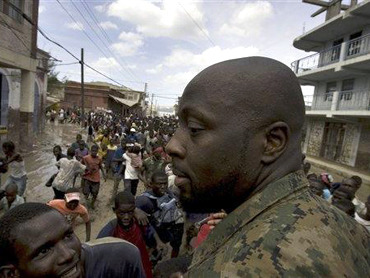 Haitian-Americans wary of Wyclef Jean's run for Haitian president may have reason to celebrate.

According to Reuters, Haitian hip-hop star Jean is not on the list of approved candidates who satisfy legal requirements to run in a Nov. 28 presidential election.

A member of Haiti's provisional electoral council told Reuters "He is not on the list as I speak." He said the country's electoral disputes bureau had ruled that Jean's candidacy did not meet several legal requirements.

The committee requires candidates to have spent the last five consecutive years living in Haiti. Jean does not fulfill that requirement, having lived in the U.S. the past five years.

The Associated Press reported earlier in the day that Haitian President Rene Preval met with the former presidential hopeful Wyclef Jean for more than two hours, discussing everything from the hip-hop artist's safety to relations with the neighboring Dominican Republic.

Jean tells the Associated Press that he felt Thursday's exchange with Rene Preval was positive.

While Jean's candidacy is still in question, the former Fugees frontman will find out for certain on Friday -- when the country's provisional electoral council is scheduled to formally release Haiti's official presidential candidate list.