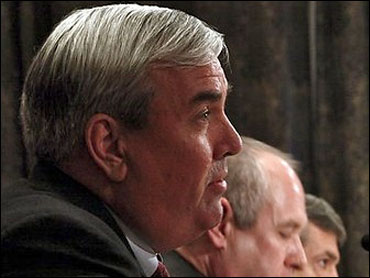 While the fortunes of the U.S. Postal Service spiral down, the personal wealth of the Postmaster General seems to be on the rise, according to a report in the Washington Times.

The newspaper reported that Postmaster General John E. Potter has received pay raises of 40 percent since 2006 and a bonus last year of $135,000.

The updated compensation package was approved by the Postal Board Of Governors and was filed in December, the newspaper reported, adding that Potter's total windfall in 2008 was $800,000 - more than double that of President Barack Obama.

A spokesman for the Postal Service said its board of governors has authority to give extra money through deferred compensation and that key congressional offices were told, the newspaper reported.

"What members of Congress were looking at was the president of FedEx making $10 million," Gerald J. McKiernan told the newspaper. "Given the responsibility, the feeling was to retain and attract [executives] some modest increase was warranted."

"There is something to be said for attractive compensation. But at the same time, the Postal Service has a government guaranteed monopoly on the delivery of first-class mail, and UPS and FedEx don't have that," Pete Sepp, vice president of the National Taxpayers Union, told the newspaper. "Because of that, there is a fundamental difference in the Postal Service's business model and that of package delivery firms," he said.

Some of the added perks Potter received were $69,253 for security, in addition to deals on life insurance, airline travel and parking, the newspaper reported.

Just last month Potter, who is the nation's 72nd Postmaster General, taking the post in 2001, told Congress that huge deficits could force the post office to cut out one day of mail delivery per week.

As mail volume dwindles and costs rise, the post office was $2.8 billion in the red last year and, "if current trends continue, we could experience a net loss of $6 billion or more this fiscal year," Potter said in testimony for a Senate Homeland Security and Governmental Affairs subcommittee.