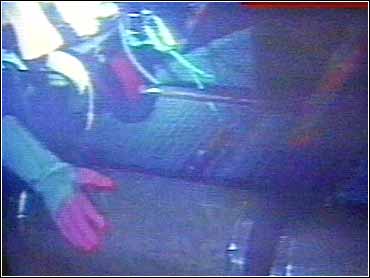 A note left by a sailor said that the Kursk nuclear submarine was sunk by the explosion of a practice torpedo, a Russian newspaper reported Monday. Navy officials refused to comment on the claim.

Russian officials found two notes from different crew members during the operation to retrieve some of the bodies of the Kursk's 118 crewmen last autumn, but said at the time that neither shed any light on the cause of the disaster.

The first note, written by Lt. Dmitry Kolesnikov, told of how 23 surviving sailors crowded into the crew's rear compartment and were unable to escape after the Kursk sank on Aug. 12. Officials have never identified the author of the second note or spelled out its contents.

The respected daily Izvestia on Monday quoted unidentified naval officers as saying that the second note was written by Lt. Rashid Aryapov, who said that the first explosion, which sent the submarine crashing onto the seabed, was caused by the misfiring of a practice torpedo.

"That confirms the reason for the disaster that is the most unpleasant for the military leadership," the newspaper said.

The government hasn't yet made its verdict on the cause, saying the disaster could have been touched off by an internal malfunction, a collision with a foreign submarine or a World War II mine. Navy officials have said that a collision with a Western submarine was the most likely version.

The unidentified Northern Fleet officers told Izvestia that the letter described how the heavy submarine had "somersaulted" in the water after the explosion and pieces of equipment that the shock wave tore from their stowage places injured crew members. They said that the note, written on a book page and wrapped in plastic, was found on one of the bodies.

"The note immediately went to the government commission in charge of investigating the cause of the disaster and we have never seen it," he said in a telephone interview.

When the note was found, Deputy Prime Minister Ilya Klebanov, who was in charge of the Kursk salvage operation, described the note as saying that the crew was suffering from carbon monoxide poisoning from the fire and the rise in pressure. The note itself was never shown.

Igor Spassky, the head of the Rubin design bureau that designed the Kursk, has said that he knew what caused the disaster but refused to name the reason. Izvestia quoted Igor Kurdin, who leads a group of retired submariners, saying that Spassky had told him that the first blast indeed came from a misfiring torpedo.

After the Kursk slammed onto the seabed, four combat torpedoes detonated, instantly killing most of the crew, Kurdin quoted Spassky as saying.

Most Russian and foreign experts have agreed that a misfiring torpedo was the most likely cause of the disaster. The government plans to raisthe submarine to the surface later this year.