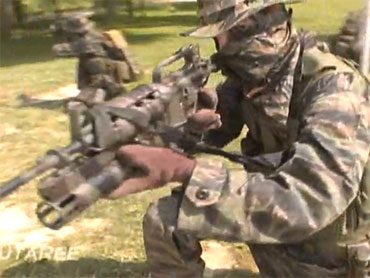 In a news report just days before the FBI arrested nine members of Christian militia group in Michigan on charges they were plotting an attack on police officers, local government reached out to the militia for help finding missing residents.

According to a report posted on AnnArbor.com March 25, Bridgewater Township Supervisor Jolea Mull twice asked local militias, including Hutaree, the group from which the nine suspects belong, to help law enforcement in their search.

Mull contacted the groups in January and in February of this year, AnnArbor.com reported. James Schiel, part of a militia group called the Michigan Militia Corps Wolverines, said Mull called him and he rounded up a team of his own militia members, as well as three from Hutaree.

"That was the very first time we were deployed in an official capacity," Schiel told AnnArbor.com, adding that it was a significant event for his group.

Mull said she looked to the militias for assistance because of their training.

"Based on what I have observed of our local militia's efforts, I highly recommend that other municipalities coordinate with and get to know their local militia members," Mull, a Republican, told AnnArbor.com.

Prosecutors say militia members hoped to kill a police officer and then ambush others at the officer's funeral, Orr reports.

"According to the plan, the Hutaree would then attack law enforcement vehicles with Improvised Explosive Devices," the indictment says.

IEDs with Explosively Formed Projectiles, according to the indictment, constitute weapons of mass destruction.

"That is an amazing plan. When you think about a funeral filled with hundreds of police officers, all of them armed, being attacked by a band of militiamen, you know, one can only begin to imagine the kind of carnage that might have resulted," Mark Potok, director of the Southern Poverty Law Center told Orr.

Attacking a police funeral was one of several scenarios mentioned as a way to go after law enforcement officers, the indictment said. Other scenarios included a fake 911 call to lure an officer to his or her death, or an attack on the family of a police officer.

After such an attack, the group allegedly planned to retreat to "rally points" protected by trip-wired IEDs for what they expected would become a violent standoff with law enforcement personnel.