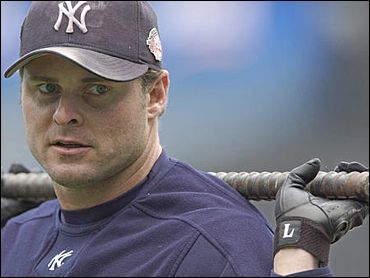 New York Yankees slugger Jason Giambi injected himself with human growth hormone in 2003 and also used steroids for at least three seasons, according to his grand jury testimony reviewed by the San Francisco Chronicle.

The testimony given in December 2003 to the federal grand jury investigating BALCO contradicts Giambi's public proclamations that he never used performance-enhancing drugs.

Giambi described how he injected human growth hormone in his stomach, testosterone into his buttocks, rubbed an undetectable steroid knows as "the cream" on his body and placed drops of another, called "the clear," under his tongue, the Chronicle reported on its Web site Wednesday night

Giambi testified that he obtained several different steroids from Barry Bonds' personal trainer, Greg Anderson, who is one of four men indicted by the grand jury investigating the Bay Area Laboratory Co-Operative. He said he got the human growth hormone from a gym in Las Vegas.

Anderson, BALCO founder Victor Conte, vice president James Valente and track coach Remi Korchemny all have pleaded not guilty to the charges, which include steroid distribution.

On Wednesday, a federal judge said she would not immediately dismiss the charges in response to accusations that prosecutors illegally searched BALCO headquarters and Anderson's house and car. U.S. District Judge Susan Illston said she may conduct hearings into the matter in January.

Giambi was among dozens of elite athletes — including Bonds, Gary Sheffield and track stars Tim Montgomery and Marion Jones — who answered the grand jury's questions last year. Bonds, Jones and Montgomery deny using illegal drugs, but Sheffield told Sports Illustrated and ESPN earlier this year that he used "the cream" and "the clear" from BALCO, which he said unknowingly to him contained illegal steroids.

The Chronicle reported in October that on a 9-minute recording it had obtained, a speaker the paper identified as Anderson is heard saying Bonds used an "undetectable" performance-enhancing drug during the 2003 season.

Giambi met Anderson when the trainer joined Bonds on an All-Star tour in Japan in November 2002. Giambi said he wanted to know what Bonds' secret for success was.

"So I started to ask him: 'Hey, what are the things you're doing with Barry? He's an incredible player. I want to still be able to work out at that age and keep playing,"' Giambi testified, according to the Chronicle. "And that's how the conversation first started."

After returning to the United States, Anderson told Giambi he could provide him with performance-enhancing drugs and suggested he stop taking the steroid Deca Durabolin that he obtained from the Las Vegas gym because it stays in the system too long, the paper reported. Giambi said he started using Deca Durabolin in 2001.

"You know, I assumed because he's Barry's trainer — you know, Barry — but he never said one time, 'This is what Barry's taking, this is what Barry's doing,"' Giambi testified. "He never gave up another name that he was dealing with or doing anything with."

Prosecutors confronted Giambi with a calendar seized from Anderson's home that detailed Giambi's schedule of drug use.

Giambi said he didn't notice a "huge difference" in his performance after starting to use illegal drugs.

Giambi came to spring training this year looking noticeably trimmer as baseball began a steroid-testing program that included punishments for the first time. Asked in February whether he had ever taken performance-enhancing drugs, Giambi said: "Are you talking about steroids? No."

Bothered by a balky knee, Giambi hit just .250 in 2003. Giambi batted .208 and played in only 80 games last season, missing time because of a tumor, which the New York Daily News reported was in his pituitary gland. Medical experts told the Chronicle that Clomid, a drug Giambi said he thought Anderson had given him, can exacerbate a tumor of the pituitary gland.

Giambi's younger brother, Jeremy, who last played in the majors with Boston in 2003, also testified that he used performance-enhancing drugs given to him by Anderson, according to the Chronicle.