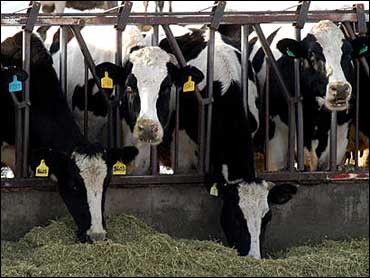 Some huge livestock farms produce more raw waste than cities as large as Philadelphia or Houston. But federal regulators are failing to control pollution from the gigantic operations or assess health risks from the enormous quantities of manure they produce, according to congressional investigators.

The Government Accountability Office report on the raw waste is to be released Wednesday to a House committee hearing on federal oversight of factory farms.

The conclusions fueled concerns about a proposed Environmental Protection Agency rule change that would eliminate one of the few federal oversight mechanisms over air and water pollution from big farms.

The rule would eliminate a requirement that farms report to federal, state and local officials when air emissions of hazardous substances like ammonia and hydrogen sulfide exceed certain levels.

EPA proposed the rule change in December, contending the requirement created an unnecessary burden for farms and that the emission release reports usually weren't needed or acted upon.

"It is unclear to us" how EPA reached that determination, GAO said, noting that a national association representing emergency responders has said in comments to EPA that the reports are needed.

"This GAO study confirms that the Bush administration's plan to exempt industrial-sized animal feeding operations from emissions reporting requirements is nothing more than a favor to big agribusiness," said Rep. John Dingell, D-Mich., chairman of the House Energy and Commerce Committee.

Dingell has summoned EPA officials to answer questions on the proposed rule change at his hearing Wednesday.

An EPA spokesman noted Tuesday that the proposed exemption was limited, as it would apply only to emissions from animal waste.

"How soon Congress forgets that it directed EPA to expeditiously resolve confusion over animal waste emissions reporting requirements" under federal law, said EPA spokesman Tim Lyons. "EPA moved forward responsibly and proposed a rule that achieved the goal of reducing the reporting burden and protected public health and the environment."

The GAO report said that no federal agency collects data on the number, size and location of "Concentrated Animal Feeding Operations," as the big farms are known. Using more general Agriculture Department data for large farms as a proxy, GAO said the number of large farms that raise animals increased 234 percent from about 3,600 in 1982 to about 12,000 in 2002.

The number of animals on the farms also increased, and with them the amount of animal waste, which can be prodigious. The report said a large farm with 800,000 hogs or a beef cattle farm with 140,000 head of cattle could each produce more than 1.6 million tons of manure per year - 1½ times more than the annual sanitary waste produced by the city of Philadelphia, and slightly more than the 1.4 million tons produced by the city of Houston every year.

In one example, GAO said that five contiguous North Carolina counties in 2002 had an estimated 7.5 million hogs that could have produced as much as 15.5 million tons of manure. Agriculture experts and government officials told investigators that raised concerns about overapplication of manure to cropland in those areas and the release of excessive levels of pollutants.

EPA doesn't limit the amount of air pollution this waste can emit, and a 2003 rule to require permits for waste discharges into water was partly overturned in court. EPA has been reworking the water discharge rule for several years but has not yet finalized it.

Without federal guidelines, states have been moving on their own, the GAO found. Officials in California, Idaho, Minnesota, Missouri, Nebraska and North Dakota reported developing state air regulations for certain pollutants emitted by factory farms.