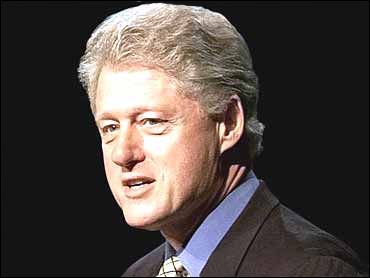 CBS 60 Minutes Correspondent Lesley Stahl reports that there are indications that President Clinton ordered Osama bin Laden's apprehension or death, and that there was a failed attempt on bin Laden's life last year.

Here are the details: Following the attacks on the U.S. embassies in Africa in August 1998, President Clinton signed a directive authorizing the CIA to apprehend bin Laden and bring him to the United States to stand trial for his role in the bombings.

The directive, which was modified several times, authorized the use of deadly force if taking bin Laden alive was deemed impossible. And in fact, according to government sources, non-Americans (we don't know what nationality) working on behalf of the CIA tried to kill bin Laden last year. These foreign operatives told the CIA they fired a rocket-propelled grenade at bin Laden as he drove in a convoy of cars through a mountainous road in Afghanistan, and that the grenade hit one of the vehicles -- though not the one bin Laden was in.

According to CBS News sources, members of the House and Senate intelligence committees were notified of both the presidential directive and the attempt on bin Laden's life.

CBS News has been told that the Clinton administration got around the long-time ban on government assassinations by coming up with a so-called "self-defense exception." The idea is that lethal force could be used against someone who either poses an imminent threat on U.S. national security or personnel, or has attacked U.S. interests in the past and is deemed likely to do so again.

As to why this story is getting out only now, Stahl suggests it might be that "there are people in Washington who want the American people to know they have not been asleep at the wheel in the war on terrorism and, even though there may have been some failures, they have been trying."