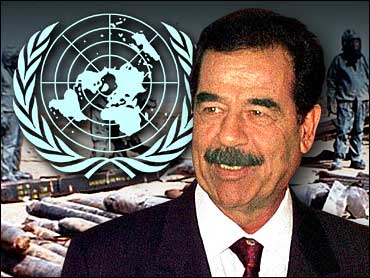 White House sources tell CBS News that the weapons inspection reports to be delivered to the U.N. Security Council today will likely not be the slam dunk against Iraq that the U.S. was hoping for. They say chief U.N. weapons inspector Hans Blix is under pressure from dovish members of the Security Council to "tone down" his remarks, knowing that the consequences could be war, reports CBS News Chief White House Correspondent John Roberts.

The report appears to be far less damning than Blix's last presentation to the U.N. He will acknowledge a new spirit of Iraqi co-operation and say Saddam seems to finally be taking inspections more seriously. But Blix will also declare there are still many unanswered questions about Iraq's weapons of mass destruction.

In what could be a preview of Friday's report, Blix said Thursday that Iraq still has a chance to "exonerate itself" if it finally gives inspectors "100 percent cooperation."

Sources say that while Blix is well aware of the pressures – and the consequences – of the report, he will present an "unvarnished" assessment of the facts. A reasonable person, one official said, would conclude Saddam is not complying enough, but added that is up to the council to decide.

Rallying the troops at Mayport Naval Station in Florida on Friday, President Bush voiced confidence the U.N. will pass a second resolution giving the green light to war.

"I'm optimistic that free nations will show backbone and courage in the face of true threats to peace and freedom," Mr. Bush said.

"I believe when it's all said and done, free nations will not allow the United Nations to fade into history as an ineffective, irrelevant, debating society," he said.

U.N. support would provide critical cover for many allies who've pledged to join a U.S. war against Iraq, but a new CBS News/New York Times poll found Mr. Bush is wise to seek it, too. With his job approval at its lowest level since 9-11 (54 percent), nearly two-thirds of Americans (63 percent) say they want the president to wait for his allies before declaring war.

The White House and Britain will wait for the Blix report before finalizing the proposed language of a second U.N. resolution. The plan, at this point, is to begin circulating the text among permanent members of the Security Council this weekend, then begin serious negotiations early next week.

Several allies, including France, Germany and Russia, want to give the U.N. inspectors more time, and have forced a divisive showdown in NATO to make their point.

Mr. Bush has said he would welcome a new U.N. resolution to bolster his case, but says he is willing to confront Saddam without one.

The showdown with Iraqi President Saddam Hussein may still be a matter of debate for the diplomats, but for the U.S. military it is well under way.

CBS News National Security Correspondent David Martin reports small numbers of U.S. Special Operations forces are already on the ground inside Iraq, paving the way for an invasion which could turn into a race to prevent Saddam from implementing a scorched-earth policy.

Knowing what Saddam did to Kuwait's oil fields in 1991, Pentagon officials say one of the first objectives will be to secure the oil fields in both northern and southern Iraq. Oil is Iraq's most valuable asset and vital to putting the country back on its feet once Saddam is gone.

Secretary of State Powell told the House Budget Committee Friday that if war comes and is won, a U.S. military leader would take temporary charge of Iraq. No one knows how long that will take although one State Department official has estimated a military occupation of Iraq might last two years.

"We have to be prepared for a fairly long-term commitment," said Powell.

And a staggering bill. Defense Secretary Donald Rumsfeld says the Pentagon has already spent more than $2 billion moving troops into position around Iraq and that official estimates put the cost of a war at $50- 60 billion.

Asked by Sen. Edward Kennedy, D-Mass., whether the United States is seriously considering using nuclear weapons against Iraq, Rumsfeld said any such decision would rest with the president but he was confident "we can do what needs to be done using conventional capabilities."

Sen. John Warner, chairman of the Armed Services Committee, asked whether U.S. forces were prepared for a possible war with Iraq while continuing the fight against terrorism.

Whatever the price of getting rid of Saddam, Rumsfeld says, it will be cheaper than 9-11.

The door to one possible way out of this crisis was slammed firmly shut Thursday, reports CBS News Correspondent Mark Phillips. If there was ever hope that Saddam would give up power and go into exile to save his country it was confirmed – he won't.

Speaking in Rome, Iraq's deputy prime minister, Tariq Aziz, said Saddam would avoid exile, in his words, "at any price." Aziz heated up the rhetoric even further in a newspaper interview, calling President Bush a new Hitler and accusing him of trying to dismantle the U.N.