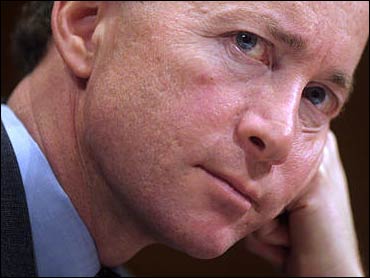 White House budget director Mitch Daniels has been subpoenaed in a lawsuit accusing him and other former IPALCO Enterprises directors of dumping millions of dollars in stock before the utility company was sold.

The Indianapolis Star reported Wednesday that Daniels, who is resigning his White House job to consider a run for governor, was among 32 former IPALCO officials issued subpoenas by Indiana securities regulators.

The Indiana Securities Division sent the requests for information Friday, after about 2,000 IPALCO employees filed a federal lawsuit alleging company insiders sold $71 million worth of stock after recommending the electric utility's sale to AES Corp. in 2001.

The lawsuit was a revision of an earlier lawsuit filed in March 2002. John Price, an attorney for the employees, said lawyers previously could document only $9 million in shares that had allegedly been sold by IPALCO officials.

When he became budget director in January 2001, Daniels sold millions of dollars worth of stock, including 60,000 shares of IPALCO stock. He made a $552,540 profit on the sale.

Daniels has said he sold the stock because of an ethics agreement common to new administration officials designed to avoid appearances of impropriety.

Other former IPALCO officials have said they sold their shares for various reasons, including to have income after losing their jobs and as a way to boost their severance pay.

The lawsuit claims the directors knew or should have known that AES shares were far more volatile than IPALCO's, and sold their shares after voting in favor of the merger.

The Star reported last December that 14 of the 30 key officers and directors sold more than $22 million of their IPALCO shares between October 2000 -- when shareholders voted to tender their shares -- to February 2001, two weeks before the close of the merger.

Daniels announced his resignation as budget chief on Tuesday. The 54-year-old former Eli Lilly & Co. executive is considered a favorite to win the Republican nomination for governor in 2004.

Daniels' departure comes as the White House was having a hard time winning congressional approval for its economic stimulus and tax-cut package.

Daniels has held the budget post since the beginning of the Bush administration, and his departure will mean that the president's entire initial economic team is gone. Fleischer said that no decision had been made on a successor.

Clay Johnson, a longtime Bush friend whom the president named to the No. 2 job at the budget agency, is in line to replace Daniels, according to several officials who spoke on condition of anonymity.

But two Republicans, also speaking on condition of anonymity, said the White House had been unable to clear his nomination past key members of the Senate. These officials declined to say what objections were raised.

Within the past six months, Mr. Bush replaced his first Treasury secretary, Paul O'Neill, with John Snow; and his former head of the National Economic Council, Lawrence Lindsey, with Stephen Friedman.

But unlike O'Neill and Lindsey, Daniels was not forced out of the job.

Daniels has been a favorite of conservatives for his frequent clashes with Congress over spending. Assigned the role of keeping the price tag of spending legislation in check, he has had testy relationships with lawmakers of both parties from the House and Senate committees that oversee expenditures.

He once accused New Yorkers of "a little money-grubbing game" for pursuing $20 billion Mr. Bush promised — and later provided — to rebuild from the Sept. 11 attacks. He called congressional mandates on federal agencies "Lilliputian do's and don'ts," and said, in The Wall Street Journal, about lawmakers, "Their motto is, 'Don't just stand there, spend something.' This is the only way they feel relevant."

Even so, Daniels showed few signs of backing down and seemed to relish his job as administration tightwad.

"The only words I've said that contribute to tension are 'no' and 'enough,"' he said.