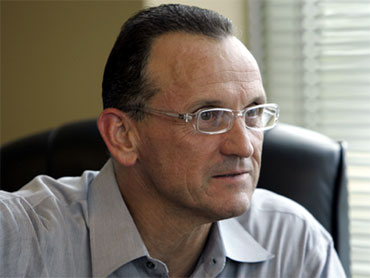 Senior Justice Department officials are reviewing a draft indictment against former president Gary Jackson, former Blackwater lawyer Andrew Howell, and a third man who used to work at the firm's armory, people close to the case told the AP. A decision is not expected until at least next month.

Any indictment, even of former executives, would be unwelcome news at a company beleaguered since a 2007 shooting involving Blackwater guards in Baghdad left 17 people dead. Under a new name, Xe, the firm is trying to win Defense Department approval to train police in Afghanistan. The contract could be worth up to $1 billion but has drawn the ire of some in Congress.

The potential charges stem from a raid conducted by federal agents in 2008 that seized 22 weapons, among them 17 AK-47s.

Multiple law enforcement officials familiar with the case said investigators are trying to determine if Blackwater obtained the official letterhead of a local sheriff to create a false justification for buying the guns. The officials spoke on condition of anonymity because they were not authorized to discuss the investigation.

Federal law prohibits private parties from buying fully automatic weapons registered after 1986, but does let law enforcement agencies have them.

Xe spokesman Mark Corallo said the company has "fully cooperated with this investigation and we will have no further comment."

Jackson said during a brief phone conversation Monday that he wouldn't be able to talk about federal charges and didn't know anything about any that might be looming.

"I haven't heard a single, solitary word," Jackson said before ending the phone call. Attempts to reach Howell for comment Monday were not successful.

In a 2008 interview with the AP, Jackson and other Blackwater executives said the company provided the local Camden County sheriff's office a place to store weapons, calling the gesture a "professional courtesy."

"We gave them a big safe so that they can store their own guns," Jackson said at the time.

Company officials, including both Jackson and Howell, downplayed the raid during the interview. Jackson said some of the 16 uniformed officers who came to serve the warrant were embarrassed by the event and said agents had to stop at Blackwater's front gate to get passes to come onto the company's sprawling campus in northeastern North Carolina.

"As a hypothetical, one would think that, if you were going on a raid, you'd take your Kevlar and your weapon," Howell said to laughter from other executives.

Blackwater, headquartered in Moyock, N.C., changed its name to Xe Services after its security guards were accused of killing unarmed Iraqi civilians more than two years ago. Those charges were later thrown out of court after a judge found prosecutors mishandled evidence.

In the 2008 North Carolina raid, agents with the federal Bureau of Alcohol, Tobacco, Firearms and Explosives searched the armory and seized 22 guns from a vault dedicated to county authorities.

The company signed agreements in 2005 in which Blackwater financed the purchase of 34 automatic weapons for the Camden County sheriff's office. Sheriff Tony Perry became the official owner of the weapons, but Blackwater was allowed to keep most of the guns at its armory.

One of the 2005 agreements viewed later by the AP says the weapons will be kept under "lock and key" and doesn't describe whether Blackwater would use the guns.

At the time of the raid, Blackwater said federal authorities knew about the weapons for years and said investigators got a complete look at the company's cache in 2005 after two employees were fired.

The company also said it was not unusual to store automatic weapons because the company is licensed to sell, provide training on or even manufacture firearms.

The 2005 agreements give the sheriff's office unlimited access to the weapons, including 17 Romanian AK-47s. Perry said at the time that his department only used the AK-47s in shooting practice at Blackwater and that none of his 19 deputies were qualified to use them.