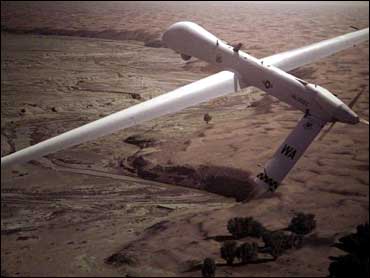 With the killing of six al Qaeda suspects in Yemen by a missile fired from a pilotless Predator spy plane, the CIA's combat participation in the war on terrorism has expanded beyond Afghanistan.

The Predator has become a deadly tool and powerful psychological weapon that seemingly comes from nowhere to deliver a fiery strike.

"It's a demonstration that al Qaeda can run, but they can't hide," said Daniel Mulvenna, a terrorism expert at the Center for Counterintelligence and Security Studies outside Washington. "Eventually the technological reach of the U.S. intelligence community is going to produce these opportunities."

Missiles fired from lurking Predators have killed Osama bin Laden's operations chief and threatened an Afghan warlord. The deadly drones give the CIA a way to track and kill suspected terrorists without putting U.S. pilots at risk, admittedly with the possibility of unintended civilian casualties.

The Yemen strike killed Qaed Salim Sinan al-Harethi, al Qaeda's chief operative in Yemen and a suspect in the October 2000 bombing of the destroyer USS Cole that killed 17 American sailors, U.S. officials said. Five other people, also believed to be al Qaeda operatives, were riding in al-Harethi's car and died in the attack.

The attack provoked criticism of U.S. tactics in the broadening terror war.

"Even terrorists must be treated according to international law. Otherwise, any country can start executing those whom they consider terrorists," she said.

The airstrike on al-Harethi's car was reminiscent of Israeli airstrikes that target vehicles of suspected members of the radical Islamic groups. The U.S. government has criticized that practice, most recently on Tuesday.

"If you look back at what we have said about targeted killings in the Israeli-Palestinian context, you will find that the reasons we have given do not necessarily apply in other circumstances," Boucher said.

"Sometimes the best course is a good offense," presidential spokesman Ari Fleischer said Tuesday. "The president has made clear that we fight the war on terrorism wherever we need. Terrorists don't recognize any borders or nations."

The use of the armed Predator apparently was the first outside Afghanistan, where CIA-operated drones have fired at least four times. One of those attacks, a November operation that also included strikes by U.S. military aircraft, killed al Qaeda military head Mohammed Atef.

The United States developed the Predator after the 1991 Persian Gulf war to give military commanders views of the battlefield without having to put pilots there.

First used in 1995, the remote-controlled spy plane can lurk in an area for up to 16 hours, unseen and unheard at 15,000 feet, its cameras transmitting live video, infrared or radar pictures to military commanders or intelligence officials anywhere in the world. The video is sharp enough to be able to spot a person from five miles away, officials say.

The CIA was the first to fly Predators modified to carry one Hellfire missile under each wing. Originally built as anti-tank weapons for Army helicopters, the 125-pound Hellfires streak through the air faster than the speed of sound to deliver about 17 pounds of high explosives.

The Bush administration has ordered an additional 22 of the aircraft and their associated ground stations at a cost of about $160 million. The Air Force already has about four dozen of them and the CIA has an undisclosed number.

The Predator has its limits. Like other small planes, it can't fly in harsh weather like snow or fog, and its video would be largely useless in those conditions anyway.

The plane also can be difficult to fly and is vulnerable to enemy anti-aircraft fire. At least nine Air Force Predators and one CIA drone have crashed during missions involving Afghanistan or Iraq since the Sept. 11 terrorist attacks.