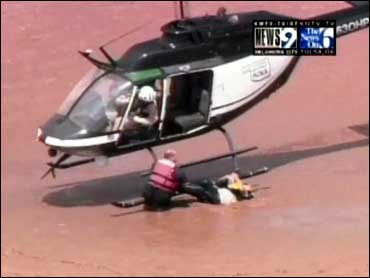 One woman drowned early Sunday and a motorist was missing after heavy rain and high winds from a tropical storm moved through Oklahoma, flooding homes and roads and knocking out power to thousands of residents.

"Evidently, she went to her cellar and the water overcame her and she couldn't get out," McDuffey said.

In nearby Carnegie, fast moving floodwaters forced an Oklahoma Highway Patrol dive team to suspend its search for the driver of a vehicle that was swept off a county road shortly after midnight, said OHP Capt. Chris West.

"The vehicle has been recovered, but the driver has not been found," West said.

Nearly 23,000 customers of Oklahoma Gas and Electric, mostly in the Oklahoma City area, remained without power about 11 a.m., the utility reported.

25 cubicles cooler than yours

Cat videos may be good for your health

"We have significant property damage. We have at least one house I know of that was destroyed," Wood said. "There is a lot of flooding and power lines down, and we are working to get a shelter set up."

Heavy rainfall caused the roof of a nursing home in Geary to collapse, but there were no injuries reported and the residents were all transported to another nursing home in Hydro, Wood said.

News video showed mobile homes blown to pieces in Watonga and damage to a hangar and a small airplane at the Watonga airport, where an 82 mph wind gust was reported at 3 a.m. Water lapped at the foundations of houses in neighborhoods in the area. Damaged trees fell on homes.

"It was quite a night," Clyden told television station KWTV-9. "This was a bad boy. The rain was straight horizontal, and the wind was just awesome."

"Residents are being advised to stay in their homes and stay off all county roads," McDuffey said. "We have numerous bridges and roads that are washed out. It's very, very dangerous."

Flood conditions forced the temporary closure of Interstate 40 near El Reno. Traffic was backed up for miles after a creek overflowed and sent water across the roadway.

"We just got the road back open," Oklahoma Highway Patrol Capt. Chris West said about 9:45 a.m. "I can't remember ever hearing of an interstate being shut down for six hours by a flood.

"You'd think Oklahoma was a Gulf Coast state and we just went through a hurricane or something."

The National Weather Service issued a flash flood warning Sunday for 11 counties stretching from south of Lawton, east to McAlester and north to Stillwater. A flood warning also remained in effect Sunday for several counties in Central Oklahoma.

Rainfall amounts exceeded 7 inches in some central Oklahoma communities as remnants of Tropical Storm Erin pushed through the area, according to the state Emergency Management Department.

The Greenfield Fire Department reported having more than 2 feet of water in its station.

A tornado warning and tornado watches were issued for a number of areas throughout the state as the storm moved through.