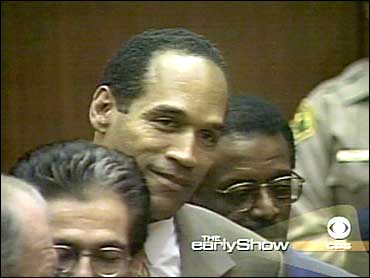 A clash of race, celebrity and stories of abuse kept the nation riveted as the drama played out daily on television.

On Friday, The Early Show National Correspondent Hattie Kauffman looks back on "the trial of the century."

"Looking at the scene you really couldn't tell what the injuries were other than it was mass trauma of some sort, because of the amount of blood," says former Los Angeles police detective Philip Vannatter.

In the early morning hours of June 13, 1994, the bodies of Nicole Brown Simpson and Ron Goldman were found outside Nicole's condominium. Nicole's neck was so badly slashed, she was nearly decapitated.

Vannatter says the evidence showed blood spots leading away from the scene of the crime to the master bedroom.

O.J. Simpson was separated from his wife, who was the mother of two of his children. Blood was found at Simpson's home when police went to notify him of her death.

"I have seen worse crime scenes, but I have never seen a case that turned into the soap opera that this turned into," says Vannatter.

Simpson was supposed to surrender, but he disappeared. His friend read what seemed to be a suicide note he'd left behind. In the note, Simpson said he had nothing to do with Nicole's murder.

Simpson's car was spotted on an L.A. freeway. The slow police pursuit of the white Bronco was televised across America.

"I think the O.J. Simpson case is the ultimate reality TV show," says University of Southern California's Dr. Todd Boyd. "It's a case that had everything. There's multiple murders. There's a famous former football player, who had become and actor. You know, there are drugs, there's sex, there's violence."

Clark notes, "There was no rush to judgment. I was there on the day that the case broke. I've never seen so much evidence even on the first day, as I did in that case."

But Clark was up against Simpson's "Dream Team," which was led by the charismatic Johnny Cochran. And, a tainted LAPD detective who lied about using racial slurs hampered the prosecution.

Mark Fuhrman was just one in a cast of characters who became household names, including "house guest" Kato Kaelin, who heard a loud noise outside Simpson's home on the night of the murder.

"I think it was probably O.J. probably jumping over and it -- the wall," says Kaelin.

Despite a mountain of evidence, Simpson was acquitted of the double murder.

"Everything that we found pointed toward O.J. Simpson," remembers Vannatter. "I think in my 20 years of working homicides, I never had a case that had this much evidence pointing at a single person."

Some criticized police and prosecutors for losing the case. Among the evidence the jury never heard was: