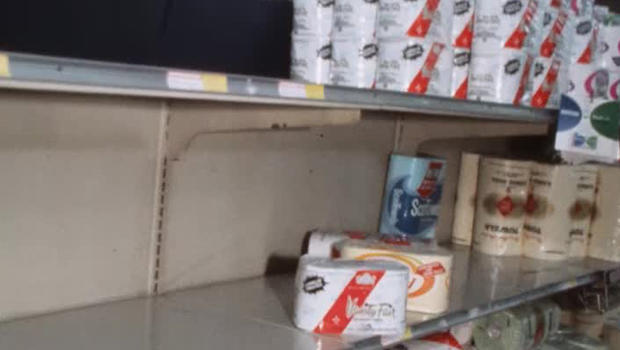 One store manager marveled, "They buy before we can put it on the shelf!" "I thought because there was going to be a shortage I would come and stock up," said one customer, "but I see someone beat me to the punch."

Yep, it happened before: a toilet paper scare during the energy crisis of the early 1970s.

Former CBS News reporter Sally Quinn covered the story at the time: "Amidst the recent preoccupation with the fuel shortage and the meat shortage, a new gap has appeared in the staples of the American household: the toilet paper shortage."

Filmmaker Brian Gersten made a documentary short about it last year – yes, before the current toilet paper panic!

Correspondent Mo Rocca said, "People are going to think you're some kind of a prophet now."

"I am not the Nostradamus of toilet paper shortages!" Gersten retorted.

Here's what happened back in December of 1973: "A congressman from Wisconsin, Harold Froehlich, releases a statement saying, 'The next thing we're gonna have to worry about is a potential toilet paper shortage,'" Gersten said.

The warning was picked up by late night king Johnny Carson's writers, who left out the "potential" part. As Carson said during his "Tonight Show" monologue on Dec. 19, 1973:

"There is an acute shortage of toilet paper in the good old United States. We gotta quit writing on it!"

The false alarm sent Carson's audience of almost 20 million running. As noted in "The Great Toilet Paper Scare," one woman said, "I'm used to being able to go when I want to, when I want to, but suddenly I think I'm going to have to start curbing my habits."

Gersten said, "People all over the country stormed supermarkets, grabbed as much toilet paper as they possibly could."

A month later, CBS News' own Walter Cronkite set the record straight: "The Scott Paper Company, citing panic buying on the retail level, said today it is implementing an allocation system for the national distribution of toilet tissue.  A Scott spokesman said unfounded rumors of a shortage has caused excessive demand at retail outlets."

And then Carson issued a clarification of sorts: "For all my life in entertainment, I don't want to be remembered as the man who created a false toilet paper scare. Apparently there is no shortage!"

And there is no shortage today … but there is another panic.

"When there's uncertainty in the world, people would like to eliminate some of that uncertainty," said Boston University economics professor Jay Zagorsky, who said it is rooted in something called "zero risk bias."

"Buying toilet paper ensures that at least one act in their life is completely taken care of," Zagorsky said.

"It gives us some degree of reassurance?" asked Rocca.

"Reassurance, certainty. You might run out of something else, but at least you have one of the staples that makes most people feel better."

But Arist Mastorides, of toilet paper manufacturer Kimberly-Clark, wants to make clear: "We're working very closely with our retail partners to ensure that we can get that product to the store shelves, and so that this temporary shortfall can be corrected."

And here's something to bowl you over: about 90% of toilet paper that Americans use is made right here in the U.S.A.

Zagorsky said, "I think the most important message that people should take away is there's actually plenty of toilet paper. There's no need to panic."

A lesson Sally Quinn imparted to our viewers over 45 years ago: "Apparently there's plenty of toilet paper for everybody. It's just the terror has caused people to hoard, thereby depleting the supply… and all for nothing. Americans, it seems, are just shortage-scared, about toilet paper and everything else."

"Every day a holiday" on the National Day Calendar