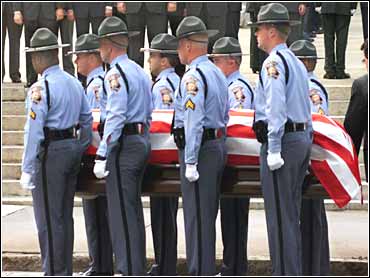 In an emotional service that left some fighting back tears, Georgia and Washington said goodbye to Senator Paul Coverdell, who died Tuesday, at age 61, of a brain hemorrhage.

Most of the state's top elected officials, a large contingent of Coverdell's Senate and House colleagues, and presidential hopeful George W. Bush were among those who crowded into Peachtree Road United Methodist Church for the service on Saturday.

Bush, who consulted with Coverdell as he pressed his campaign during the past year, traveled from his ranch outside Austin, Texas to attend. He sat with Coverdell's widow, Nancy.

The Texas Governor said he came "to honor our friend and pay our last respects. Lord bless the senator and his family."

Georgia Governor Roy Barnes, one of the speakers, was among those who had to choke back tears, especially as he said, "Goodbye, old friend."

Barnes called Coverdell a man who could be trusted.

Senator Phil Gramm, a Republican from Texas, drew appreciative chuckles by saying: "We won't soon be forgetting that squeaky voice, that disheveled hair, those flailing arms."

But he added that well-wishers also wouldn't forget Coverdell's "lion heart, iron will and loving ways."

One of Coverdell's constituents, Elvina Young, tearfully told CBS News how much she cared for the Senator: "I loved him, very much. I loved his integrity and his honor and everything about him.

The governor has the option of appointing someone to serve until a special non-partisan election in November.

McCain spoke with reporters outside the church where the memorial was held and described his collegue as "the most appreciated man in the Senate because of his kindness and his courtesy."

Coverdell's ashes will be laid to rest in a private ceremony later for the family.

Coverdell was elected to the Georgia Senate in 1970 and rose through the ranks to become state Senate minority leader, a post he held for 15 years. He was a strong advocate of Georgia's agricultural interests and fought plans to trim military operations in the state.

He was named director of the Peace Corps under President George Bush in 1989.

A stream of about 4,800 mourners filed past the flag-draped casket of Georgia's senior senator on Friday as he lie in state in the middle of the four-story rotunda of the Georgia Capitol.

Coverdell was the first Georgian to be memorialized with a public viewinat the state Capitol since the death of former Secretary of State Ben Fortson in 1979.