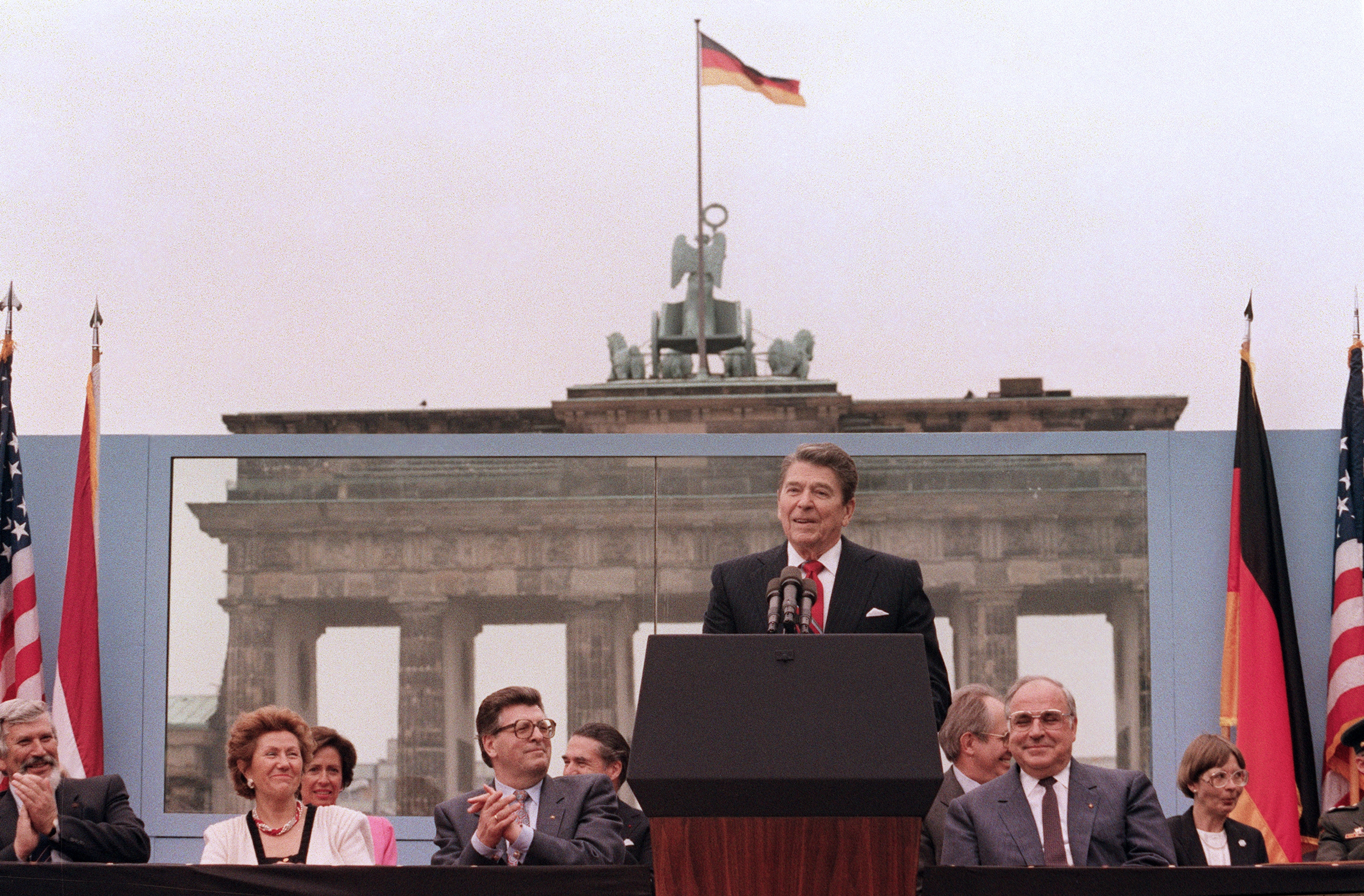 The speech, delivered about 100 yards from the Berlin Wall, marked Reagan's most prominent call for the reunification of East and West Berlin, and was considered a bold challenge to Gorbachev to prove he was serious about reforming Soviet governmental policies. Ultimately, it also signaled a hallmark moment in Reagan's presidency.

"The audience was exhilarated," says CBS News senior White House correspondent Bill Plante, who covered the speech for CBS at the time. "And so were most of us who covered the event."

The speech is remembered largely for Reagan's explicit call to "tear down this wall," but the line, now recognized as its most powerful, almost didn't make it in to the script.

For weeks prior to the address, there had been controversy within the administration over whether or not to include it. According to Peter Robinson, the writer tasked with crafting the speech, there was resistance among both the State Department and the National Security Council (NSC) over the language. Detractors - among whom included then Deputy National Security Adviser Colin Powell - thought the "tear down this wall" line would be taken as an affront to Gorbachev, and could undermine policies he was already implementing aimed at opening Soviet society.

In fact, Robinson said, members of the state department and NSC were so concerned that they submitted "draft after draft after draft" of alternate possible versions of the address - absent in all of which was the direct call to "tear down this wall."

"The fear was that it was too provocative and that it was undermine Gorbachev's efforts at Glasnost and Perestroika," said Ken Duberstein, former White House Chief of Staff under Reagan, who was at the time Reagan's Deputy Chief of Staff.

The president, however, appeared to have no hesitation over whether or not to deliver the line.

"We were in the limousine on the way to the Brandenburg Gate and he was reviewing the speech text one last time," recalled Duberstein. "He was not using a teleprompter -- he was using prepared remarks and paper. When he got to the section of the speech that was disputed by the State Department, he looked and me said, 'It's gonna drive the State Department boys crazy, but I'm gonna leave it in.'"

Despite the weeks of controversy that had preceded Reagan's address, most in the White House agreed afterward that the decision had been the right one, according to Robinson.

"Tommy [Griscom, the communications director at the time] said as soon as the president delivered the speech everybody felt that it had not only the right thing to do, but almost instantly it became impossible to imagine that he would not have done it," said Robinson.

Abroad, the reaction was more mixed: Tass, the Soviet press agency, accused Reagan of delivering an ''openly provocative, war-mongering speech." And according to Douglas Brinkley, a history professor at Rice University and the history consultant for CBS News, many observers saw the speech as "disastrous." Communist leaders were critical of the remarks, and even West Berlin's then-mayor, Eberhard Diepgen, was wary.

"We were all a little more skeptical than American politicians -- the significance and the chances of tearing down the wall, there we were skeptical," he recalled in an interview years later.

"It was not well-received within the foreign policy community or the pundit class," Brinkley said, in an interview with CBS. "Many people called foul."

As Brinkley notes, however, history has been kind to the president's speech.

"It's seen as a turning point in Cold War," he said. "I think Reagan's speech bolstered the morale of the pro-democracy movement in East Germany."

"There was a movement that was growing and building toward liberalization and this gave great impetus to it in the aftermath," added Duberstein. "Even though people in the Soviet Union thought the speech was provocative, it worked."

In the summer of 1989, thousands of people fled East Germany as Hungary disabled its border fences. And in November, the East German politburo started allowing refugees to exit directly between East Germany and West Germany. In October of 1990, the two countries reunified.

"I think Reagan's speech was an incredibly important moment, but it was fully realized a year and a half later, when the Wall came down," said Duberstein. "I heard him deliver the lines and also the forceful reaction from the audience -- you could just sense it, you knew that inevitably that wall would come down. But I did not dream it would come down in a year and a half."

Robinson said he didn't realize the full import of the words he had written until that moment arrived. At the time, he was out of the White House and in business school, watching coverage of the event on television. Amid the footage of celebrations, networks started running some clips from the Reagan speech.

"I'd written the thing but I thought, wow, that's more powerful than I realized," he said.