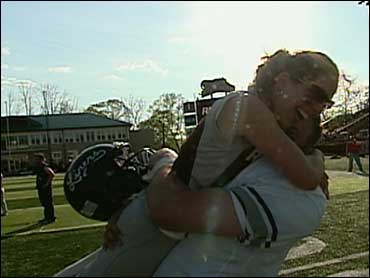 A river may separate the two towns of Easton, Pa., and Phillipsburg, N.J., but there's a divide that runs much deeper - over football.

Since 1906, the annual Easton-Phillipsburg game has fired up fans, reports CBS News correspondent Seth Doane. No one can forget the 1993 game, which ended in a tie 7 to 7.

For 15 years, that unresolved game has remained unfinished business - until now. On Sunday, the very same players - even the same cheerleaders - got the chance to turn back time and replay the game.

Ten thousand tickets sold out in 90 minutes. No one wanted to miss the chance to settle the score.

One player, Bruce Lebitz, lost 57 pounds to get ready to play in the game. For eight weeks, all the players trained hard, thanks to sponsorship from Gatorade - and superstar supervision from the Manning brothers.

"Are there games you'd like to replay?" Doane asked Peyton Manning.

"Plenty, plenty, believe me," Manning said. "But you know, that's the thing about it. I play every game like it's my last."

Back then, these men played for the love of the game. This time, it's about much more. Jason Seas recently lost his mother.

"She'd be so proud right now … to be here, see me playing this, knowing that I finally got what I want," Seas said.

"It happened at the right time," said Vivian Richetta, 79, the grandmother of a cheerleader.

"What do you mean by that?" Doane asked.

"Well, everything - everybody is down, so depressed, this was such a lift," Richetta said.

In the end, Phillipsburg won, 27 to 12. But it hardly mattered, because these rustbelt towns had something to cheer about for a change.