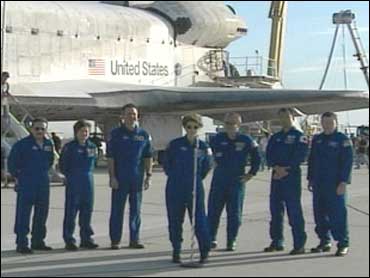 Crew members of the space shuttle Discovery say their colleagues who died on the last shuttle flight were never far from their minds on their two-week mission.

And shuttle co-pilot Jim Kelly admits there was a "moment of trepidation" as commander Eileen Collins was about to execute the de-orbit burn this morning. It was at that point that Columbia started to break apart 2 1/2 years ago.

Kelly says he kept watching for warning signs of possible trouble -- though he admits there might not have been much that could have been done about it.

But Kelly says the astronauts have to put their trust in the people who sent them into orbit. And he says because of the changes made following Columbia, this crew had a much better idea of what kind of shape the shuttle was in.

Collins, meanwhile, says the biggest accomplishment of this flight was simply "getting the shuttle flying again."

Discovery's crew, braving the hellish fire of re-entry for the first time since Columbia's ill-fated descent, flew safely back to Earth Tuesday, gliding to a predawn California touchdown to close out an action-packed mission.

With Collins at the controls, Discovery swooped to a ghostly, tire-smoking touchdown on runway 22 at Edwards Air Force Base in California's Mojave Desert at 8:11:22 a.m. EDT, one day late because of concern about cloudy weather in Florida. The crew had two shots at a Kennedy Space Center landing Tuesday, but off-shore storms forced entry flight director LeRoy Cain to divert the shuttle to California.

"It looks fantastic," Collins said of the shuttle's condition, after the crew walked around it for the traditional post-landing inspection.

President Bush offered his congratulations to the Discovery team during a press briefing at his Texas ranch.
"It was a great achievement," the president said. "It was an important step for NASA as it regains the confidence of the American people and begins to transition to the new mission we've set out for NASA."