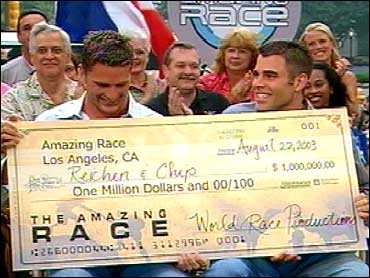 Thursday night, Aug. 21, the fourth edition of "The Amazing Race" completed its final stage. With David and Jeff stuck in Australia, Reichen and Chip battled it out with Kelly and Jon for the million-dollar prize.

The winners and the finalists talked to The Early Show co-anchor Rene Syler about their race filled with excitement and camaraderie. On the road, the story was quite different.

A total of 40,000 miles ago, Reichen and Chip say they did not expect to come out as the winners.

Reichen explains, "In the beginning, our big focus was to make it through the first round. We were like, 'We've got to make it through that first leg.' It kept working for us. We finally got into that top three and it was a whole different race. We started feeling like we could do this."

Intense is how Chip could be described throughout his international adventure. He tells Syler in real life, he can be the same, off and on. He says, "I'm still learning to loosen up."

Reichen says, "When we first found out we were going to be on the race, we said, 'We're gay and we'd like to show America that gay people can do anything that straight people can do.' That's a stereotype of the homosexual male. We just wanted to prove that we could do anything."

The race definitely provided challenges that brought out the best and the worst in the competitors as well as some laughter. Kelly and Jon were great for making up nicknames.

Kelly says, "All I can say is, you got a screwball from Texas and a jerk from Jersey and we're bound to say stupid things. That's my explanation."

A highlight of their competition, perhaps, was the one that involved diving for a rock and Jon had to bust the rock open to get the clue. And he stripped naked on national TV.

"It was my last pair of clean underwear. I didn't want to get that wet feeling," he says, "I was trying to cover myself up."

The winners say one of the biggest surprises of the race for them was seeing how tough runner-ups Kelly and Jon were. Kelly, for one, smashed some boards and ended up hurting her hand, Reichen notes.

The time, she says, she started to realize it was the end for her team was in Tokyo. Jon agrees, explaining, "It was in Japan, that was the beginning of the end for us."

The ticket agent would not let them on the plane and they lost their connection. Kelly notes, "It's all fun and games until it gets down to the wire. Things come out you don't know what's going on."

The team says even though they caught with Reichen and Chip later on, mentally they had already lost.

It was a different story for Dave and Jeff. They went from first place to last. They ended up being stuck in Australia.

Laughing, Dave says, "We just got back yesterday." It probably looked great on paper to try to go to Sydney, which was the hub, but the strategy didn't work out for the team.

Asked what they were thinking when they realized their strategy did not pay off, Jeff says, "I don't think we can say that on TV. It wasn't good."

To the racers, Keoghan says, "I want to congratulate all of the teams. They gave us some great content. You are all winners. 'The Amazing Race' is about getting across the finish line first. We had a great finish with these two teams (pointing at Reichen and Chip and Kelly and Jon) in particular. I'm sorry you got left in Australia (he says to Dave and Jeff). We would like to present in $1 million jackpot. It's very, very large. Reichen and Chip, I think you'll all agree they deserved it. Hope you enjoy that money. Great job!