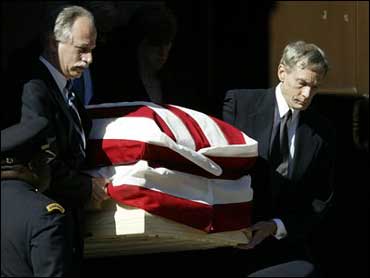 Chief Justice William H. Rehnquist was buried Wednesday as President Bush led the nation in bidding farewell to the man who orchestrated a dramatic states rights power shift in a third of a century on the Supreme Court and settled the acrimonious 2000 election in Mr. Bush's favor.

With more laughs than tears, family and friends spoke poignantly of Rehnquist's final days — when he cracked jokes in the face of death — and proudly of the imprint of his 33 years on the high court.

"We remember the integrity and the sense of duty that he brought to every task before him," Mr. Bush told the funeral audience during a two-hour service at historic St. Matthew's Cathedral. Rehnquist was a steady, guiding presence on the court, Mr. Bush said of the nation's 16th chief justice who died last Saturday at 80.

The service drew Washington's power elite, including the eight Supreme Court justices and John Roberts, a former Rehnquist law clerk whom Mr. Bush has named to succeed him.

Rehnquist, a veteran of the Army Air Forces in World War II, was buried in a private ceremony in Arlington National Cemetery in a grave not far from those of several other justices. His headstone was not yet engraved. From the grave site, where his wife was buried in 1991, the Capitol is visible.

Despite battling thyroid cancer, Rehnquist managed to attend Mr. Bush's second inauguration in January — a gesture the president recalled with appreciation. "Many will never forget the sight of this man, weakened by illness, rise to his full height and say in a strong voice, 'Raise your right hand, Mr. President, and repeat after me,'" Mr. Bush said.

The chief justice, a solid conservative, was leader of the "Rehnquist five" who often favored states rights over federal government power, and in a bitter 5-4 vote handed Mr. Bush the 2000 election. There was only passing mention of that during the service, as well as his duties presiding over President Clinton's impeachment trial in 1999.

Instead, friends and family talked about his penchant for wagers, jokes, sports, geography, history, tennis, and competition of any type.

"If you valued your money, you would be careful about betting with the chief. He usually won," said Justice Sandra Day O'Connor, who dated Rehnquist when both were in law school together in the 1950s. "I think the chief bet he could live out another term despite his illness. He lost that bet, as did all of us, but he won all the prizes for a life well lived."

Comparing Rehnquist to an expert horse rider, O'Connor said, "He guided us with loose reins and used the spurs only rarely." He was, she added, "courageous at the end of his life just as he was throughout his life," even joking with doctors in a final visit to the hospital.

The service, scripted in part by the chief justice before his death, had a light touch. A granddaughter talked about learning poker tips from him. His son said his dad "could forgive almost anything in a person except being humorless."

"No one smelled more roses than my dad," James Rehnquist told the funeral audience.

Cardinal Theodore McCarrick, in a welcome to those assembled in the Roman Catholic church, praised Rehnquist as a "loving father and husband, an outstanding legal scholar, a tireless champion of life and a true lover of the law: in every sense, a great American."

Said Mr. Bush, "To work beside William Rehnquist was to learn how a wise man looks at the law and how a good man looks at life."

Rehnquist's flag-draped casket was brought to the church from the court, where he had lain in repose since Tuesday morning. Long lines had formed at the court to file past.

Cabinet officers and other Washington dignitaries filled St. Matthew's as trumpeters played. President Kennedy's funeral was held at the church in 1963, and Pope John Paul II celebrated Mass in 1979.

The family of Rehnquist, a Lutheran, requested St. Matthew's primarily because of the space the Roman Catholic church provided.

At the service, Nancy Rehnquist Spears joked about her father's history quizzing and his love of games and gambling. She recalled him promising $5 if she could tell the history buff when Queen Elizabeth died.

"There was silence, then a muffled curse," she recalled. "Five dollars was not a lot of money, not now, not then, but my father spent the rest of the summer trying to win it back from me."

Mr. Bush initially nominated Roberts, a federal appellate judge, to replace O'Connor, who announced in July that she would step down.

After Rehnquist's death the president chose Roberts to be the nation's 17th chief justice instead and said that the list of possible nominees for O'Connor's seat was wide open.

Mr. Bush and Senate Republicans are pushing to confirm Roberts before the new court session that begins Oct. 3. Democrats have cautioned against a rush to approval now that Roberts is a candidate for chief justice and at age 50, could shape the court for decades.

Flags, including the one above the court, were at half-staff in honor of Rehnquist, who was appointed by President Nixon and then elevated to chief justice in 1986 by President Reagan.

Washington protocol underscored a changing of the guard. Roberts, the former Rehnquist clerk named to succeed his old boss, was among the pallbearers carrying the flag-draped casket up the court's long steps and into the Great Hall.

"John G. Roberts, Jr. took hold of his former boss's casket along with seven other former law clerks as they strode up the steps of the Supreme Court," said CBSNews.com Legal Analyst Andrew Cohen.

The president said Monday that he would nominate Roberts to be the nation's 17th chief justice instead and that the list of possible nominees for O'Connor's seat was now "wide open."