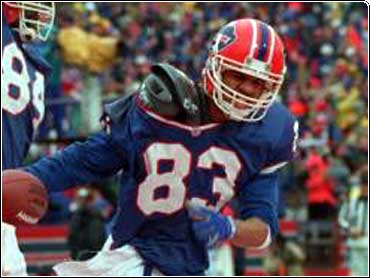 Andre Reed, whose 941 receptions are second to Jerry Rice on the NFL career list, left the Denver Broncos on Friday in hopes of finding a team in need of an experienced wide receiver.

Broncos coach Mike Shanahan told reporters he thought Reed was retiring after 15 seasons, but Reed's agent said that was not the case.

"That whole thing with retiring was a miscommunication," agent Gary Uberstine said. "They've since talked and cleared it all up. He's not retiring and Mike has granted him his release so he can pursue a more immediate opportunity."

Reed's departure came a few days after Shanahan told the receiver he would not be in uniform for Denver's season-opener Monday night against St. Louis.

"I think it's always tough when you're going to be in the Hall of Fame and then all of a sudden you might not dress out for a game," Shanahan said. "He's got a lot of pride and he's worked extremely hard. I know he can play in the NFL. It's just with our situation right now, he would not be dressing."

Reed, who signed with the Broncos on the eve of training camp in June, narrowly made Denver's roster and was buried on the depth chart behind Ed McCaffrey, Rod Smith, Robert Brooks and Travis McGriff.

Despite his situation, Reed seemed comfortable playing a backup role. When asked earlier this week about the prospect of watching from the sideline, Reed said he was willing to be patient if it meant a chance to win a championship.

"There probably are some teams I could go to," he said, "but I don't want to move around and do this and do that. I'm not in my fifth year. I'm in my 16th. My ego isn't that battered because I'm not a starter or I might not dress for some games."

Though encouraged by Reed's positive attitude, Shanahan told him to think about his decision during the week. Two days of practice apparently prompted Reed to change his mind.

"He really struggled with it all week," Uberstine said. "Although he's come to grips with the fact that he not a starter, he wanted to be in a position where he's dressing and he has an opportunity to get on the field in another capacity."

Reed, 36, was the primary target for most of his career in Buffalo, catching 941 passes for 13,095 yards and 86 touchdowns. He was selected to seven Pro Bowls and played in four Super Bowls, but left the Bills sayin he wanted a chance for more playing time.

"He's got more catches than everybody combined on our football team," Shanahan said. "I think that speaks volumes. He's a Hall of Fame player, and hopefully he'll get in quickly."

Uberstine said Reed has not received any immediate offers from other NFL teams. Finding an immediate spot could prove difficult considering the season begins Sunday.

Depending on injuries to the Broncos and other teams in Week 1, Reed was hoping to get one more chance. If not, he will be eligible for the Hall of Fame in 2004.

"If this is the best opportunity out there, he's content to not participate," Uberstine said. "It wasn't looking for greener pastures. He wasn't comfortable with not contributing on any basis."