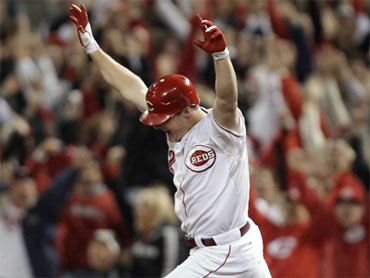 Three major league teams had a chance to clinch postseason berths last night, and all three were successful.

Cincinnati captured the NL Central crown in dramatic fashion, with a Jay Bruce homer in the bottom of the ninth lifting them to a 3-2 victory over the Houston Astros. It's the Reds first division title since 1995.

It was a fitting finish to the unexpected championship drive. Cincinnati has won 22 games in its last at-bat. That's second-most in the majors.

With the title, Dusty Baker joins Bill McKechnie as the only managers to lead three different NL teams to the playoffs. Baker also has made it with the Giants and Cubs.

Tampa Bay clinched its second playoff berth in three years by shutting out Baltimore 5-0. David Price limited the Orioles to six hits over eight innings and allowed only one runner past second base while earning his 19th win. Carl Crawford and Carlos Pena hit solo homers to support the 25-year-old left-hander before a crowd of 17,891 that joined in the celebration at Tropicana Field.

The win keeps the Rays a half-game ahead of New York in the AL East race. The Yankees also clinched a postseason berth by beating the Blue Jays 6-1. CC Sabathia (suh-BATH'-ee-uh) picked up his 21st W of the season.

In other games with postseason implications, NL West leader San Francisco increased its advantage over San Diego to two games by beating visiting Arizona 4-2 while the second-place Padres were dropping a 5-2 decision to the visiting Chicago Cubs. That reduces the Giants magic number for clinching the division to four entering tonight's play.

The Braves opened up a 1 1/2-game lead over San Diego in the NL wild-card race by beating Florida 3-2 under the lights in Atlanta.

In the rest of in the NL:

- Casey Blake homered twice, Rafael Furcal had two triples and the L.A. Dodgers eliminated the Colorado Rockies from the wild card chase with a 9-7 victory.

- Adam Dunn's 38th home run in the bottom of the ninth gave last-place Washington a 2-1 win over NL East-champion Philadelphia.

- Pittsburgh topped St. Louis 7-2. Garrett Jones homered as the Cards were eliminated from the playoff chase.

Over in the AL:

- Seattle beat AL West-champion Texas 3-1. Felix Hernandez won his 13th game. The right-hander lowered his AL-best ERA to 2.27 in what might have been his last start of the season.

- Paul Konerko tied the game in the eighth inning with a run-scoring double and Dayan Viciedo won it with a pinch-hit RBI single in the ninth as the Chicago White Sox rallied to beat the Boston Red Sox 5-4. The Red Sox are eliminated.

- Detroit and Cleveland were rained out. They'll play a doubleheader Wednesday.