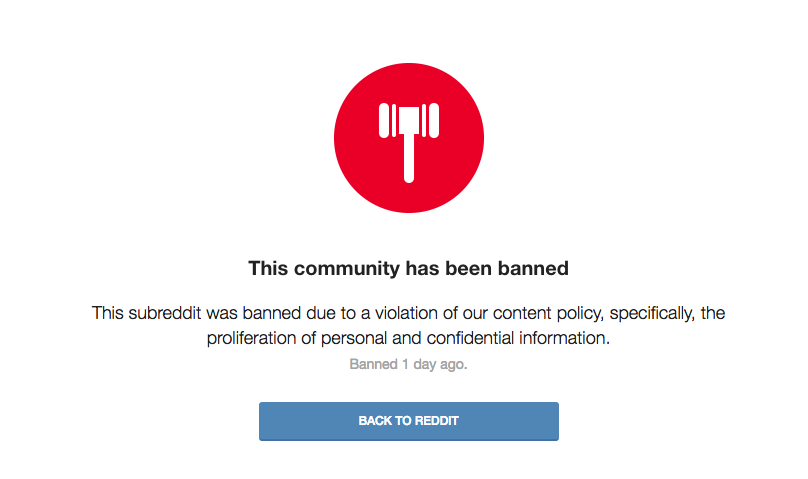 Reddit banned “alt-right” subreddit, /r/altright, on Wednesday, quickly sparking speculation online as to why the popular channel was shut down.

Users who attempt to enter the page receive an error message, which explains the subreddit was banned due to a violation of “content policy, specifically the proliferation of personal and confidential information.” A similar subreddit, titled /r/alternativeright, was also banned, though the page didn’t list a specific reason for the removal. Reddit simply states that the channel violated “the Reddit rules.”

“Alt-right” refers to an extreme right-wing movement whose members often espouse white nationalism. Its supporters have been a vocal presence in a number of controversial and conspiracy-fueled Reddit discussion threads.

“Reddit is the proud home to some of the most authentic conversations online,” a spokesman said, explaining that Reddit is clear in its terms of service that users and communities can get banned for violations. “We strive to be a welcoming, open platform for all by trusting our users to maintain an environment that cultivates genuine conversation and adheres to our content policy.”

According to CNET, some /r/altright users had been engaged in recent efforts to “dox” or expose private information about the person who reportedly punched white nationalist leader Richard Spencer in the face during an interview in Washington, D.C. on Inauguration Day.

However, Reddit did not confirm that doxxing was the reason for the ban.

The ban was enacted the day Reddit co-founder Alexis Ohanian shared an open letter to the Reddit community, speaking out against President Donald Trump’s executive order halting refugees and nationals from seven predominantly Muslim countries from entering the United States.

Reddit says it will continue to monitor subreddits for possible site violations.

“There is no single solution to these issues and we are actively engaging with the Reddit community to improve everyone’s experience,” a spokesman said.