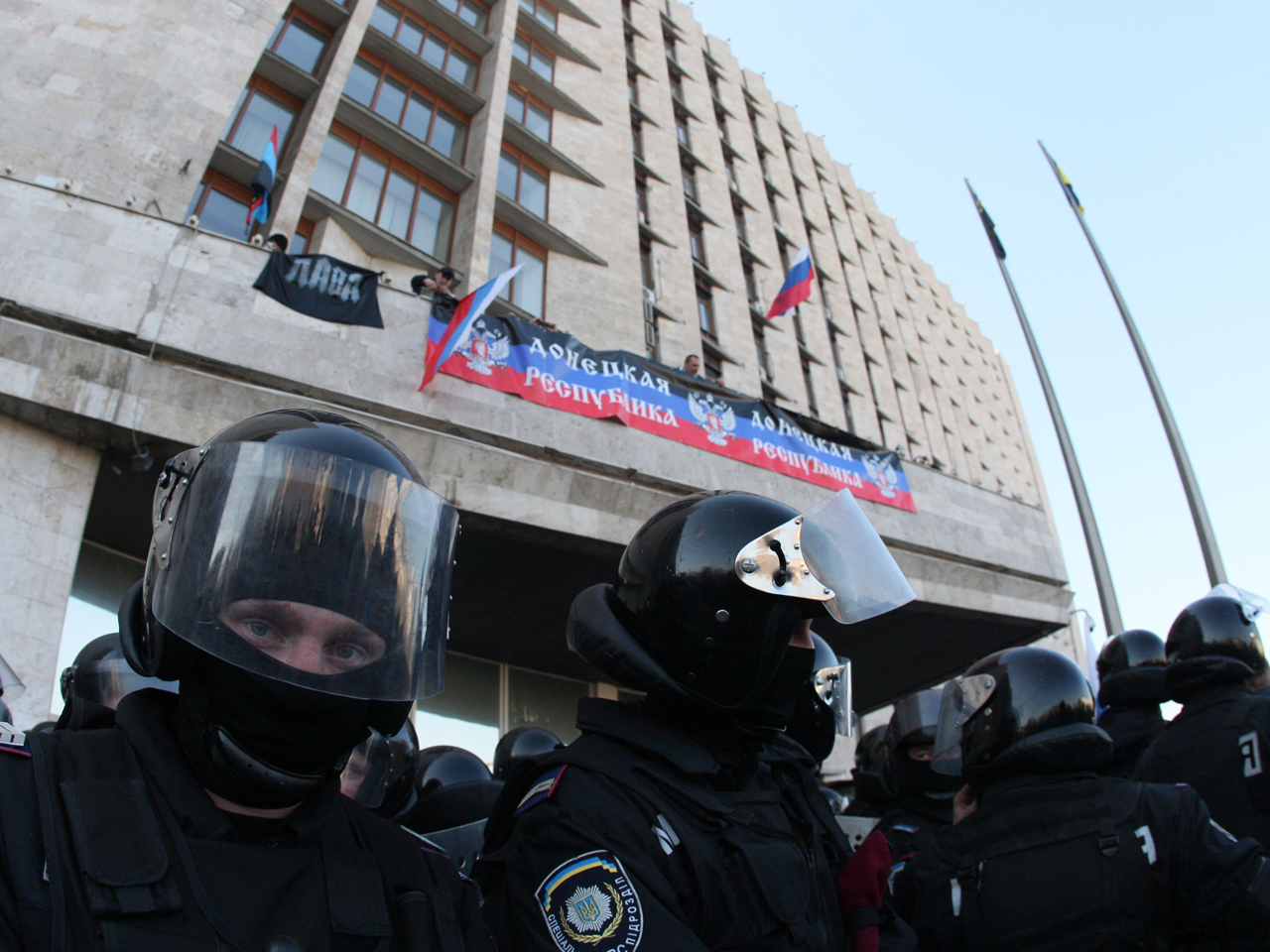 In Donetsk, 50 miles west of the Russian border, a large group of people, including many in masks carrying sticks and stones, surged into the provincial government building and smashed windows.

A gathering of several hundred, many of them waving Russian flags, then listened to speeches delivered from a balcony emblazoned with a banner reading "Donetsk Republic." Activists in the building said they want to see a referendum for the Donetsk province to join Russia.

An AP photographer reported seeing people bringing car tires to be used as barricades against any presumed attempt by authorities to retake the building.

Eastern Ukraine was the heartland of support for Viktor Yanukovych, the president who fled to Russia in February after months of protests. About half of the region's residents are ethnic Russians, many of whom believe Ukraine's acting authorities are Ukrainian nationalists who will oppress Russians.

Ukraine's interim authorities deny they are infringing the rights of the ethnic Russian population and accuse Moscow of trying to sow instability. Russia has moved large contingents of troops to areas near the Ukrainian border, and speculation is strong that unrest in eastern Ukraine could be used as a pretext for a Russian incursion.

Since Crimea held a referendum to secede and then was annexed by Russia in March, calls for similar referenda in Ukraine's east have emerged.

In Luhansk, to the northeast from Donetsk, hundreds of people surrounded the local headquarters of the security service and later scaled the facade to plant a Russian flag on the roof. Ukrainian media reported that demonstrators pelted the building with eggs, and then stones, a smoke grenade and finally a firebomb. The flames were reportedly quickly extinguished.

A police officer and a demonstrator were injured in the disturbances.

Local media reported similar unrest in Kharkiv, less than an hour's drive from the Russian border.

On Saturday, Ukraine's security service said it had detained a 15-strong armed gang planning to seize power in Luhansk province.

The Security Service of Ukraine said it seized 300 machine guns, an antitank grenade launcher, a large number of grenades, five handguns and firebombs.

It said the group intended to mount a grab for power. No names or additional details were provided.

Also Sunday, authorities in Ukraine said they found the body of a kidnapped journalist who played an active role in protests that led to Yanukovych's ouster. The body was found in a forest about 60 miles outside the capital, Kiev.

Cherkassk province prosecutors said Vasily Sergiyenko was abducted in his home city of Korsun-Shevchenkivskyi on Friday evening and later murdered. The nationalist Svoboda party, of which Sergiyenko was a member, said the reporter was found with stab wounds and signs of beatings to his head and knees.