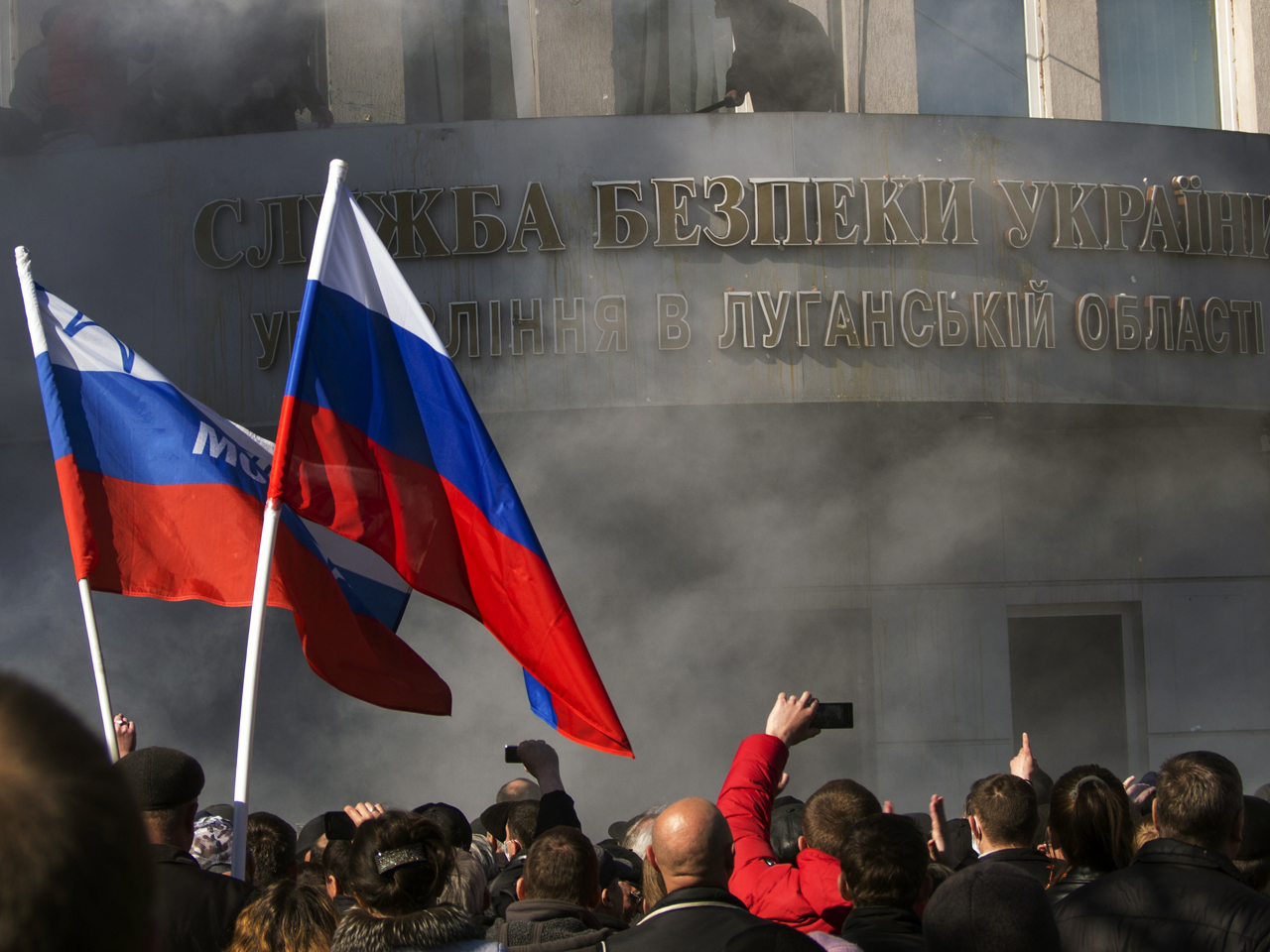 KIEV, Ukraine -- Ukraine's prime minister accused Russia on Monday of sowing unrest in his country's eastern provinces as a pretext for dispatching troops across the border.

Speaking at an emergency Cabinet meeting, Prime Minister Arseniy Yatsenyuk said Russia was behind seizures of several government buildings in eastern regions that have for weeks seen a spike in secessionist sentiment.

"The plan is to destabilize the situation, the plan is for foreign troops to cross the border and seize the country's territory, which we will not allow," he said, adding that people engaged in the unrest have distinct Russian accents.

Earlier in the day, the Interior Ministry reported that armed gunmen had occupied a security services building in Luhansk, a city some 15 miles west of Russia that has seen frequent protests since the country's Russia-friendly president was ousted in February.

Police in Luhansk said they have been put on alert and have blocked all entrances to the city.

A crowd of pro-Russian activists stormed the building on Sunday. Local media reported that demonstrators pelted the building with eggs, and then stones, a smoke grenade and finally a firebomb. The flames were reportedly quickly extinguished.

Police said nine people were injured during the assault on the building.

Eastern Ukraine was the heartland of support for Viktor Yanukovych, the president who fled to Russia in February after months of protests. About half of the region's residents are ethnic Russians, many of whom believe Ukraine's acting authorities are Ukrainian nationalists who will oppress Russians.

Ukraine's interim authorities deny they are infringing the rights of the ethnic Russian population. Russia has moved large contingents of troops to areas near the Ukrainian border, and speculation is strong that unrest in eastern Ukraine could be used as a pretext for a Russian incursion.

Since Crimea held a secession referendum and then was annexed by Russia in March, calls for similar votes in Ukraine's east have emerged.

Interior Minister Arsen Avakov said Monday that the Kharkiv building had been retaken by the authorities.

In Donetsk, local media reported that groups occupying the provincial government building have barricaded the entrance with car tires and barbed wire.

Elsewhere, Russian news agencies reported Monday that prosecutors have opened a criminal investigation into the death of a Crimea-based Ukrainian army major, who was shot and killed by a Russian soldier on Sunday.

Russian reports said a group of Ukrainian soldiers in the village of Novofedorovskoye had been drinking and were on their way home when they passed Russian soldiers guarding an entry to the military base where they previously worked, and an argument kicked off between the two groups.