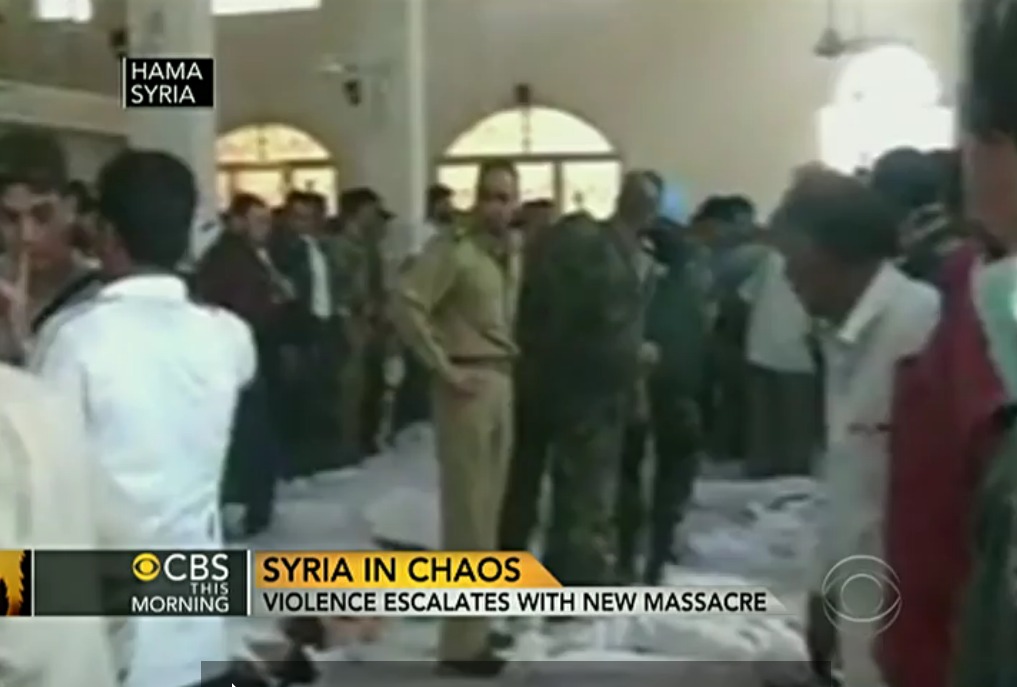 (CBS/AP) BEIRUT - U.N. Secretary-General Ban Ki-moon said unarmed U.N. monitors came under fire Thursday as they tried to reach the scene of the latest Syrian mass killing. Activists said government forces killed nearly 80 people, including women and children who were shot, hacked to death and burned in their homes.

The reports of mass killings came just weeks after more than 100 people were killed in one day in a cluster of villages known as Houla in central Homs province, many of them children and women gunned down in their homes. U.N. investigators blamed pro-government gunmen for at least some of the killings, but the Syrian regime denied responsibility and blamed rebels for the deaths.

Palmer reports the killings are bound to play into the debate at the United Nations, where international envoy Kofi Annan was trying to convince the world that his peace plan for Syria wasn't a lost cause.

The Houla massacre brought international outrage and a coordinated expulsion of Syrian diplomats from world capitals.

Ban told the U.N. General Assembly that the monitors "were shot at with small arms" as they tried to reach Mazraat al-Qubair, a farming area in the central Hama province. The group initially was denied access. He did not mention any casualties and it was not clear who was behind the shooting.

Annan had a grim assessment of the coming days and weeks in Syria.

"If things do not change, the future is likely to be one of brutal repression, massacres, sectarian violence, and even all-out civil war," Annan told the General Assembly. "All Syrians will lose."

Syria denied that its forces committed a massacre as "absolutely baseless" and blamed the violence on terrorists who are trying to provoke foreign military intervention to topple Assad.

A resident of Mazraat al-Qubair said troops shelled the area for five hours Wednesday before government-aligned militiamen known as shabiha entered the area, "killing and hacking everyone they could find."

Leith Al-Hamwy told The Associated Press by telephone that he survived by hiding in an olive grove about 800 yards from the farms as the killings were taking place. But he said his mother and six siblings, the youngest 10-year-old twins, did not.

"When I came out of hiding and went inside the houses, I saw bodies everywhere. Entire families either shot or killed with sharp sticks and knives," he said.

Al-Hamwy said the gunmen set his family home on fire and his family burned to death. Around 80 people in total died, he said, many of them children, and 18 homes were either destroyed by the shelling or burned down.

Syria's main opposition group in exile, the Syrian National Council, also said 78 people were killed in Mazraat al-Qubair when government-aligned militiamen converged on the village from neighboring pro-regime villages. Some of the dead were killed execution-style, others were slain with knives, the SNC said. It said 35 of the dead were from the same family and more than half of them were women and children.

The council told CBS News the incident strongly resembles what they say happened in Houla at the end of May - when 108 people were killed in shelling and house-to-house raids.

"Women and children were burned inside their homes in al-Qubair," said Mousab Alhamadee, an activist based in Hama.

Gen. Robert Mood, the head of the observers mission in Syria, said U.N. patrols headed to the village of were stopped at Syrian army checkpoints and in some cases turned back. He said some patrols were also stopped by civilians and added they had received information from residents of the area that the safety of observers was at risk if they entered the village.

"The regime-sponsored violence that we witnessed again in Hama yesterday is simply unconscionable," she said in Turkey. "Assad has doubled down on his brutality and duplicity, and Syria will not, cannot be peaceful, stable or certainly democratic until Assad goes."

The exact death toll and circumstances of the killings overnight in Mazraat al-Qubair were impossible to confirm. The violence is bound to reinforce the growing belief that a peace plan brokered by Kofi Annan is unraveling as the country spirals toward civil war.

Both Homs and Hama have been centers of opposition to Assad's rule during the 15-month uprising.

The Britain-based Observatory for Human Rights said it had compiled the names of at least 49 people who had died in the massacre. But Rami Abdul-Rahman, director of the group which relies on a network of activists on the ground, said the circumstances of the killings were still unclear and called on U.N. observers to visit the area immediately.

The Local Coordination Committees, another activist group, group gave a higher death toll, saying more than 78 people were killed, including many women and children. It said pro-government militiamen known as shabiha first shelled the farming area and then went in and killed the residents there. It said some of the dead were stabbed to death while other bodies were burned.

A government statement published on the state-run news agency SANA said "an armed terrorist group committed an appalling crime" in Mazraat al-Qubair, killing nine women and children. It said that after the crime, residents there appealed to Syrian authorities in Hama to intervene to protect them, adding that authorities went to the farm and stormed a hideout of the group and clashed with them.

Amateur video posted on the Internet purported to show the bodies of babies, children and two women wrapped in blankets and lined with frozen bottles of water to slow their corpses from rotting in a large room with brightly patterned red carpet.

Another row of bodies lay elsewhere: a grandmother, a mother, and five siblings and two cousins, according to the video narrator, all neatly wrapped in white sheets, more frozen water bottles tucked between them. One toddler's arm covered her face. Their names were scrawled on pieces of paper and tucked into their shrouds.

In another video, the camera pans over to four blackened, charred objects too disfigured to be identified as human bodies. The narrator said they were of a mother and two children who were shelled in their home.

The authenticity of the videos could not be independently verified.

Al-Qubair is a small farm in the overwhelmingly Sunni village of Maarzaf around 12 miles west of the city of Hama with around 30 homes and around 160 inhabitants. Activists said the Sunni village is surrounded by a string of Alawite villages. Alawites are an offshoot of Shiite Islam and Assad is a member of the sect, while the opposition is dominated by Sunnis.

Attempts to reach more eyewitnesses and residents of the area was difficult, making the verification of what went on extremely difficult. The Syrian government keeps tight restrictions on journalists.

The statement claimed the killings were meant to put pressure on the Syrian regime ahead of a U.N. Security Council meeting.

British Prime Minister David Cameron urged concerted action from the international community against Syrian President Bashar Assad's regime following the latest reports. He said that if the reports of the "brutal and sickening attack" are true, it adds further proof that the Assad regime is "completely illegitimate and cannot stand."

Speaking during a visit to Norway, Cameron insisted more must be done to isolate Assad's regime and show that "the whole world" wants to see political transition in Syria and condemns "absolutely" the Syrian regime.

In Paris, French Foreign Ministry spokesman Bernard Valero said ministers from the so-called "Friends of Syria" countries — many European and Arab nations — would meet in the French capital on July 6 to help support the Annan plan. He said the meeting would mobilize "all states and organizations that want to support the Syrian people" amid the repression.