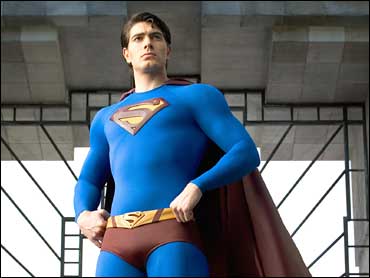 It might be a hard sell to Average Joe, but tough guys do wear tights. Think of Renaissance warriors. Think of Errol Flynn, Superman and Kobe Bryant.

They've all worn tights and lived to tell about it. The tights actually have shown off their nicely toned muscles.

Maybe Average Joe is worried his legs are a little limp.

2But Brandon Routh - the new Superman - has got nothing to worry about.

"He looked good in tights," gushes Louise Mingenbach, costume designer for "Superman Returns," which opened in theaters Wednesday. "A lot of effort went into those tights."

There were nearly 75 fittings for his high-tech, ultra-thin costume, as Mingenbach and her team literally tried to iron out any wrinkles in the fabric. The result was somewhat sheer, seamless tights that Mingenbach compares to women's pantyhose. "If you hold them up to the light, you'll see through them," she says with a laugh.

They're actually made of a fabric called Milliskin, a Spandex blend.

To Mingenbach's surprise, Routh wasn't embarrassed by the process of costumers going over every inch of his body, or by the fact that in today's society it's usually women who wear tights.

"Men are not used to showing off their legs, but he was strangely unselfconscious about it. Maybe because it was Superman, so he knew what he was going into. He probably knew he couldn't just wear the cape," she says.

3Mingenbach, however, doesn't put every Tom, Dick or Wolverine in tights. She also was the costume designer on the first two "X-Men" films, for which there was a conscious decision not to put the characters in Spandex.

"X-Men wore tights in the comics but they're not the Man of Steel. (Director) Bryan (Singer, who also directed "Superman Returns") felt their costume should be in protective gear. They needed to be protected, Superman doesn't. That's why Superman can wear tights."

But Routh isn't the only guy in tights this year. NBA stars, such as Bryant and Vince Carter, are wearing them on the court and even far-less athletic-looking Jack Black is wearing them on screen in "Nacho Libre."

OK, so it'd be a stretch to call tights a fashion trend in menswear, but style watchers already know that leggings and opaque tights will be an important look this fall in ladies' fashion.

"Tights really frame men. I think you can capture the virility. Men have worn tights forever; think of the 16th century. They were strong men and no one questioned that," Mazon says.

The tights helped Black's "Nacho" character, even without a perfect body, show both strength and emotion. "You could see his muscles, but he didn't look aggressive," Mazon describes.

She says a man's legs in tights are "a sculpture of movement." Also, she adds, at least in the case of a wrestler, tights are practical since they offer much freer movement than traditional athletic wear.

NBA players seem to like tights for other reasons as well. Superstar LeBron James told the AP last winter that he wore tights under his Cleveland Cavaliers shorts to help prevent injuries.
Milwaukee Bucks forward Joe Smith said he was just trying to keep his knees warm after having knee surgery.

James, however, did indicate he thought some of his peers just liked the look and were trying to make a fashion statement. (The NBA is rumored to be banning tights on the court next season.)

Don't look for Black to take his "Nacho" look to the Hollywood streets, though he did find it to have more appeal than he thought. "I wouldn't wear it to the laundromat or to the grocery store," he said. "But it does have a certain amount of power when you dress up like that. It really grabs the attention of all the people around you."