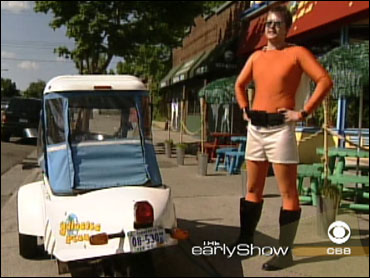 There never happens to be a superhero around when you need one.

That is, unless you happen to be near Galactic Pizza in Minneapolis.

It dresses all its delivery people in superhero costumes and one of them, Cameron Evans, took his role seriously, coming to the aid of a mugging victim.

He may not be able to leap tall buildings in a single bound, but Evans was making his delivery rounds dressed as his character, "Luke Pie-Rocker," complete with cape and tights, when he intervened after someone snatched Terry Skarman's purse.

"I could hear footsteps behind me," Skarman told co-anchor Harry Smith on The Early Show Friday, "and suddenly, a young guy was in front of me, trying to snatch my purse from my shoulder, and I just kept grabbing it back. And, finally, he got it off my shoulder."

He started running, and she started screaming for help.

"I was unencumbered at the time," Evans told Smith. "I had a pair of empty pizza bags. I had just come out from a delivery. And I was lucky enough that I was able to drop the empty bags when I heard her call of distress, and I was able to take off and run after the suspect."

And not a phone booth in sight!

He and two other passersby caught up with the suspect and managed to get Skarman's purse back, though the suspect got away.

Evans said his outfit helped him help rescue Skarman: "I don't think I could have attained the necessary speed had I been in my civilian wear. The Spandex really helps. It streamlines me. Makes me more aerodynamic. It allows me to pursue evildoers at nearly twice the speed of a pair of jeans and a T-shirt."

He added that this was the first time Luke Pie-Rocker had to swoop into action.

"Typically," Evans said, "we get pretty lucky. I'm not put in that situation. I think the threat of a galactic superhero chasing someone down is usually going to be enough to keep most people at bay. This guy, he didn't know what he was dealing with."

All delivery people at Galactic Pizza not only wear superhero costumes, they drive "gizmos" — tiny, electric, one-person vehicles. And the shop uses only renewable, wind energy.