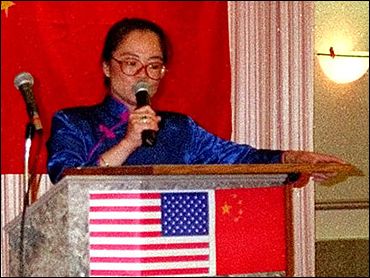 The FBI has been hit with another scandal, this one involving sex, money and a double agent for the Chinese whose code name was "Parlor Maid."

Federal prosecutors said a former agent responsible for tracking down Chinese spies had an affair with an alleged Chinese double agent and allowed her access to classified documents.

FBI Director Robert Mueller calls it "a sad day" for the bureau.

Former agent, James J. Smith, 59, recruited Republican political activist Katrina Leung in the early 1980s to become an FBI "asset" and became her "handler," seeking information about the People's Republic of China, according to an FBI affidavit.

The married FBI man and Leung, from California, had a sexual relationship from that time until Smith's retirement in 2000, federal prosecutors alleged, saying the FBI paid her more than $1.7 million for services and expenses.

In documents unsealed Wednesday in U.S. District Court in Los Angeles, Smith was charged with "gross negligence in handling documents related to the national defense." Smith appeared in handcuffs before a federal magistrate who set bail at $250,000 and scheduled an initial hearing for April 29.

Leung, who worked covertly for the Chinese government, is charged with unauthorized copying of U.S. secrets with intent of providing them to Chinese intelligence services.

Leung, 49, was arrested Wednesday and was ordered held without bond in Los Angeles until a Friday hearing out of concern she might flee the country. The charges against Smith and Leung carry maximum sentences of 10 years in prison.

Code-named "Parlor Maid" by the FBI, Leung used her relationship with Smith to gain access to classified documents, frequently copying them and providing details to Chinese officials, according to the affidavit. Examples include files regarding Chinese fugitives, a telephone list from an espionage probe, lists of FBI agents and names of agents serving at overseas posts.

She had a contact code-named "Mao" at China's Ministry of State Security intelligence service, the affidavit said. Leung, in turn, was known to the Chinese by her alias, "Luo."

Even with the criminal charges in this case, the FBI is still going to have to explain what precisely was going on in the Chinese espionage division in Los Angeles, which is a very prominent office, says CBS News Correspondent Stephanie Lambidakis. Among the other questions is how such a relationship could go undetected for 20 years, and how agents were allowed to get so cozy with their sources.

A statement issued by Leung's two attorneys said that she is "a loyal American citizen" who repeatedly put herself in danger to help the FBI and who would be vindicated. Smith's attorney, Brian Sun, said after the hearing that the affidavit "states that she basically stole stuff from him."

However, the affidavit contends Smith learned that Leung was providing information to the Chinese government in 1991 but "continued to allow Leung access to classified information" for about nine more years. When another FBI agent approached Smith about Leung's alleged duplicity, the affidavit said Smith claimed the problem was under control.

Mueller said he has requested internal and Justice Department inspector general reviews "to determine what went wrong, why our safeguards failed to detect this misconduct sooner and where accountability lies."

Officials said Mueller was not initially told about the case when he became FBI director in September 2001. He learned about it later that year and created a task force that investigated for 13 months.

Smith, who worked for the FBI for 30 years, was involved in the investigation into whether China tried to funnel money into the 1996 U.S. elections in a bid to gain influence.

Smith worked with Democratic fund-raiser Johnny Chung, who cooperated with the FBI and pleaded guilty to charges stemming from his admission that he received $300,000 from Chinese intelligence officials to influence congressional campaigns.

The campaign finance connection was not mentioned in the FBI affidavit unsealed Wednesday.

The case is similar to that of former FBI agent Richard Miller, who served 13 years in prison for passing information to two pro-Soviet Russian immigrants. One of them, Svetlana Ogorodnikov, was described as Miller's lover.

Leung is president of a business consulting firm in California and a director of the Los Angeles World Affairs Council. It promotes greater understanding of global issues and includes a number of prominent people as directors.