He was awaiting arraignment Wednesday and it wasn't clear whether he had an attorney. A message left at his home was not immediately returned.

The May 25 explosion near the Guggenheim museum on the Upper East Side shattered the store's windows but caused no injuries. Police do not believe it is related to other explosions around the city in the past four years: at the British consulate in May 2005, the Mexican consulate in October 2007 and the Times Square military recruiting station in March 2008.

Kelly said Shaw was trying to emulate the character named Tyler Durden from the 1999 film about a spineless pencil pusher, played by Ed Norton, who takes up with the dangerous yet manly Durden. The two form a secret "fight club," where men beat one another to a pulp in an attempt to feel more alive.

Shaw formed his own fight club in which boys beat one another in various locales around the city including Central Park, Kelly said. At least one member got a broken nose, he said. 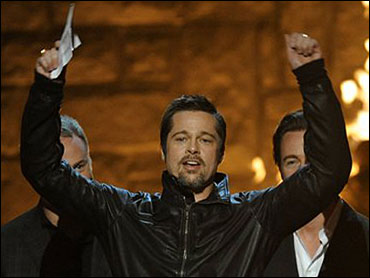 (AP Photo)
Photo: Brad Pitt accepting a "Fight Club" award at a Spike TV ceremony. Pitt played one of the main characters in the 1999 film.

The second, more dastardly plot hatched by Pitt's character in the film was called "project mayhem" and included escalating attacks on symbols of corporate America.

Shaw apparently told at least one friend to "watch the news over Memorial Day" because he was about to launch his own version of "project mayhem," Kelly said. Investigators are looking into whether more people might have been involved.

Police say the suspect picked the site because a Starbucks was a target in the movie. It wasn't clear why the specific coffee shop was chosen. There are dozens around the city.

Shaw recently graduated from the City-as-School, an alternative public high school in the West Village neighborhood of Manhattan that was founded in 1972, police said.

The blast occurred around 3:30 a.m. on May 25. A witness reported seeing two people, one blond, running from the scene. The device, made of fireworks powder, a plastic bottle, a metal cap and electrical tape, was set off with a hand-lit fuse.

Investigators recovered homemade bomb materials, a copy of "Fight Club," a box of sparklers and a newspaper clipping about the attack from Shaw's home, Kelly said.

Investigators are still working to identify suspects in the other blasts and believe they were caused by the same person or group of people, but not related to this case, Kelly said.

In those bombings, a lone bicyclist was seen in the area before the blasts, caused by either phony grenades or canisters packed with explosive powder. No was hurt in those blasts, either.

In all cases, the explosions were "powerful enough to have caused serious injury or death," Kelly said.

The Starbucks Corp., based in Seattle, is the world's largest gourmet coffee retailer, with more than 15,000 stores, according to a 2008 profile on its Web site. The company has said it didn't believe its store was hit intentionally. A spokesperson said Wednesday the company was aware of the arrest but could not comment further because the investigation is ongoing.