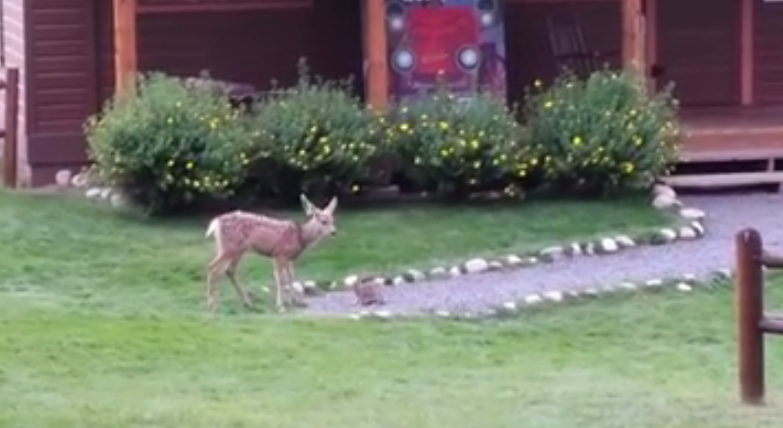 It's like watching a Disney movie come to life.

A video of a fawn and bunny playing together in front of the Rocky Mountains last week proves that Bambi and Thumper exist in real life.

Even better, they may actually be best friends.

Some YMCA of the Rockies staff members reportedly claim to have seen the pair playing together before.

Although Brand Manager for YMCA of the Rockies Rachel Anderson hasn't spoken to staff members who have seen this, she told CBS News "It wouldn't be surprising, because they're all over the place all the time and come to property and play."

The baby deer and bunny were seen bumping, jumping and frolicking around Lula W. Dorsey Museum at Estes Park Center in Colorado for about 30 to 40 minutes.

It was almost as if Thumper was saying, "'Hiya, Bambi! Watch what I can do!'"

It's unlike anything Anderson has seen before.

"We see wildlife all the time," Anderson said. "It's really a treat for our guests, but this is really something special."

Thousands of social media users seem to agree. The video was shared by more than 7,500 people and has been viewed by 200,000.

"Yup...Bambi and Thumper! What a beautiful moment to witness," one user commented.

"This should be the reason why you move to Colorado," another replied. "It's like a Disney movie."

When you're situated next to Rocky Mountain National Park, you're bound to get some great photos and videos of wildlife -- but not anything like this, Anderson says.