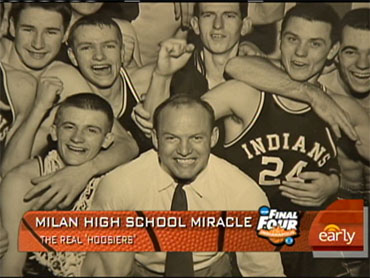 This year's Final Four is being played in the heart of hoops country - Indiana.

It was the legendary state high school championship team of 1954 from tiny Milan, Ind. that inspired one of the most popular sports movies of all time, "Hoosiers," which hit the silver screen in 1986.

"Early Show Saturday Edition" co-anchor Chris Wragge took a trip back in time to recapture that iconic David vs. Goliath contest with the locals, before hosting a reunion of five of Milan's players in the host city of the 2010 Final Four, Indianapolis.

Tiny Milan High beat mighty Muncie Central, 32-30, in the game featured years later in the iconic movie - a game some have called "the greatest ever played."

"As long as some of us old people are breathing," Milan High secretary Betty Dobson told Wragge, "it'll still be here."

Milan's upset win led Angelo Pizzo to write the screenplay for "Hoosiers," about a make-believe town named Hickory. "I started looking at names that made sense," Pizzo laughed, "and, for some reason, I wanted the name of a tree. I don't know why."

The baskets nailed to the sides of barns where the real-life Milan boys practiced are now gone, but not the memories.

"Everybody in this state has a Milan story and you guys are the centerpiece of that," Wragge remarked to '54 Milan team member Bobby Plump.

"They estimated that 90 percent of the adult population either listened (to) or watched that game," Plump smiled.

In the movie, Gene Hackman played a hotheaded coach at the end of a career scarred by hitting one of his players.

Was it an accurate portrayal? "No," Plump responded. "It was far-removed from our coach," Plump says. "180 degrees," a Plump teammate told Wragge.

Real-life coach Marvin Wood, known affectionately as "Woody," rarely even raised his voice, but knew how to get his team ready before a big game. Recalled Plump, "He said, 'Fellas, I want to tell you something. They can shoot the eyes out of the basket and they're awful fast, and a couple of 'em can jump up and take a quarter off the top of the backboard.' ... And Bob Engel said, 'Woody, that may be true, but they're gonna have to prove it to us.!" '

There was no alcoholic assistant coach in '54, as there was in "Hooseirs" and, says Wragge, "there's still resentment in Milan, where people think the real story is better than the movie.

"Don't misunderstand me," Betty Dobson, the Milan High secretary says. "It was a good movie. But that's what it was. It was a movie."

In the real game, with his team behind two points in the fourth quarter, Plump held the ball for more than two minutes.

Dobson was so nervous she couldn't look: "I'd say, 'What's he doing?' Bobby was holding that ball and I said, 'Is he moving?'" '

The biggest similarity between game and movie -- the final 18 seconds.

Plump says, "Jimmy Barnes was guarding me and I faked to the left and he leaned a little bit."

"When you see the movie," Wragge asked Plump, "and (a character named) Jimmy Chitwood says, 'Coach, I could make it (the last shot),' do you wish you had?"

"No," Plump admitted with a chuckle. " (But) I wish I looked like he did and had as good a stroke as he did!"

Time has moved on for Milan's men of '54. And they say the game of life has become much more important than that game.

"I'd like to be remembered as a good teacher," Gene White reflected. Teammate Rollin Cutter says, "I'm not sure it (the way he wants to be remembered) would even be related to basketball -- but as a person, as a father, as a person in my community."

Then, Wragge was there as five of those players had a reunion:

Cousins Stuck On Ride 900 Feet Up