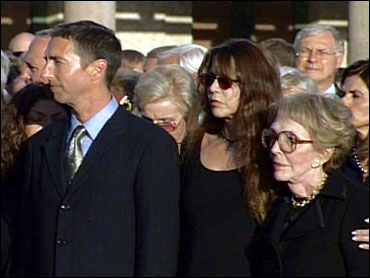 Ron Reagan, the younger son of the late President Reagan, criticized the Bush administration's foreign policy, saying he believed the president misled Americans to gain support for the Iraq war.

"We lied our way into the war," he said on CNN's "Larry King Live" on Wednesday, referring to allegations that Saddam Hussein had weapons of mass destruction and direct connections to al Qaeda. "It's a terrible mistake, a terrible foreign policy error."

Reagan, 46, a vocal opponent of his father's conservative politics, said he would vote for anyone who could beat the current president.

Reagan also said he was angered over the administration's opposition to human embryonic stem cell research.

"It's shameful," he said. "We're not talking about fetuses, human beings being killed. We're talking about collections of cells in a petri dish that are never ever going to be a human being."

Reagan said he expected his mother to continue to speak out in favor of stem cell research. Nancy Reagan has long argued that such work could lead to cures for a number of diseases like the Alzheimer's that afflicted her husband.