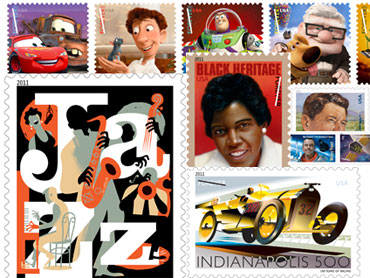 Ronald Reagan, an actor who had a more lasting impact as the 40th president, will be honored in February with a stamp on the 100th anniversary of his birth.

Also getting a stamp for a 100th birthday: the Indianapolis 500. The Postal Service announced its 2011 lineup on Tuesday.

Other events being commemorated with stamps include the 150th anniversaries of the beginning of the Civil War and of Kansas statehood and the 50th anniversary of U.S. manned spaceflight. In addition to a stamp featuring Shepard, the first American in space, is one noting the Mercury orbit of the spacecraft Messenger, expected to take place in March.

Actress Helen Hayes, twice the winner of an Academy Award (1931's "The Sin of Madelon Claudet" and 1970's "Airport"), will be honored with a stamp. Joining her is another Oscar winner, actor Gregory Peck (1962's "To Kill a Mockingbird").

Actress Carmen Miranda, whose fruit-filled headgear made her an icon of 1940s musical comedies, is one of the performers being remembered in the five-stamp Latin Music Legends series. Others are Selena, Carlos Gardel, Tito Puente and Celia Cruz.

Animated characters like Buzz Lightyear get their due in a series of Disney Pixar stamps from the movies "Cars," "Ratatouille," "Toy Story," "UP" and "WALL(asterisk)E."

Among other stamps to be issued in 2011 are those for:

Mark Twain, author of "The Adventures of Huckleberry Finn" and a bestselling autobiography just released this year.

Rep. Barbara Jordan of Texas, a groundbreaking politician and civil rights leader. She is the Black Heritage stamp honoree.