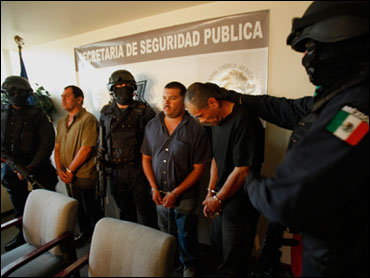 This article was written by Sonny Bunch.

In 2002, Rep. Cynthia McKinney looked untouchable; the Georgia Democrat had held her seat in Congress for a decade and her majority-minority district had shown no desire to kick the liberal, female, African-American out of office. While she was long known for being outspoken (McKinney accused Al Gore of having a "low Negro tolerance level" in 1996, and then in 1998 said that she was "absolutely sick and tired of having to have my appearance at the White House validated by white people"), McKinney's constituents did not seem to mind; an article in the Atlanta Journal Constitution from 2002 was headlined "What will she say next? Rep. Cynthia McKinney makes outrageous statements, wins by big margins."

Until 9/11, that is. While the majority of Americans, including the leadership of her own party, rallied around the president for at least a short time, McKinney chose to attack him. Suggesting complicity in the attacks on the World Trade Center and Pentagon, McKinney said on a California radio station that "We know there were numerous warnings of the events to come on September 11 . . . What did this administration know and when did it know it, about the events of September 11? Who else knew, and why did they not warn the innocent people of New York who were needlessly murdered? What do they have to hide?" McKinney then got to what, in her mind, was the heart of the matter, stating that "corporations close to the administration have directly benefited from the increased defense spending arising from the aftermath of September 11th."

In addition to her unflattering comments about the Bush administration, McKinney took it upon herself to apologize to a Saudi prince whose offer to donate $10 million to a 9/11 charity was rebuffed by New York City mayor Rudy Giuliani when the prince informed the United States it should change its policy towards Israel and Palestine. McKinney's opponent in the primary, a judge named Denise Majette, took advantage of both McKinney's inopportune statements and a groundswell of support from the nation's Jewish community to send the Congresswoman packing.

At least, until 2004. When Majette decided to make a quixotic run at the Senate seat vacated by Zell Miller, McKinney threw her hat back into the ring and won the Democratic primary without a runoff. Most observers of the race said she won by keeping her head down and making as few public appearances as possible, thus minimizing any chance of controversy. This strategy even worked for a short while after her return to Congress, though she never abandoned her conspiracy-theory roots; in September 2005 she hosted a panel in which participants suggested, among other things, that a controlled demolition brought down the World Trade Center, former senator Paul Wellstone was murdered for his outspoken opposition to the Iraq War, and the FBI was responsible for the Anthrax attacks shortly after September 11th.

Nor did she tone down her racial rhetoric after her return to Congress. In the aftermath of Katrina, McKinney was quoted by the Atlanta Inquirer as saying, in relation to the relief efforts, "As I saw African Americans, mostly African American families ripped apart, I could only think about slavery, families ripped apart, herded into what looked like concentration camps."

None of this caused a real stir, however. It was just Cynthia being Cynthia. All of that changed when she was again thrust into the national spotlight after allegedly assaulting a police officer. The facts of the case seemed cut and dry--While bypassing a metal detector (as members of Congress are allowed to do), McKinney was asked repeatedly to stop by a police officer. When she did not comply, he attempted to restrain her and she struck him. Though a grand jury refused to charge the congresswoman with assault, her behavior infuriated many in her district and across the country, and put her seemingly-safe primary back into play.

This time, her challenger is Hank Johnson, a DeKalb county commissioner. In one of the biggest surprises of the election cycle so far, Johnson forced an August 8 runoff against McKinney by garnering 44.4 percent of the vote, compared to McKinney's 47.1 percent. (In Georgia, if no one accumulates more than 50 percent of the vote there is a runoff to determine the winner.) Johnson is no conservative-in-sheep's clothing. He opposes the war in Iraq, insists he will oppose any "attempts to undermine the liberties and rights that make ours a free and civil society" if elected, and wants the government to insure all Americans have health care.

Johnson's biography also touts the number of acquittals and hung juries he has racked up as a defense lawyer, which makes it all the more odd that the Georgia chapter of the Fraternal Order of Police is behind him 100 percent of the way. Georgia's FOP is a nonprofit and cannot donate to political races, but the chapter president, Carlton Stallings, assured me that "individuals have been making donations out of their own pockets to his campaign" as a result of McKinney's run in with the Capitol Police. He also informed me that as soon as he found out the race was headed to a runoff, he got "in contact with Chuck Canterbury [national president of the Fraternal Order of Police], and he's made a donation through their political action committee of $1,000." In her own way, Cynthia McKinney is a uniter, not a divider: She unites people of all backgrounds against her.

The front page of McKinney's reelection website warns her supporters that she "will be pitted against a mostly unknown and unproven opponent, who will nonetheless have the unanimous backing of big national media and national money." The numbers don't bear this accusation out, however. Unlike McKinney, almost all of Johnson's money has come from in-state sources. Through June 28th, Johnson had only received 7 donations from individuals outside of Georgia, compared to 141 in-state contributions. The contrast to McKinney is stark: 104 of her 217 donations come from out-of-state sources. When looking at the absolute numbers, the statistics are even more damning: almost two-thirds of McKinney's cash comes from outside of Georgia. Of the ten zip codes that have donated the most money to McKinney's campaign, only three are located in Georgia--four are in California, two are in Las Vegas, NV, and the last is in Pasadena, Texas.

On August 8th the voters of Georgia's 4th Congressional district will have their choice between a member who will represent them, and a member whose most impressive legislative accomplishment this term is authoring the Tupac Amaru Shakur Records Collection Act. (The bill declares "all Government records related to the life and death of Tupac Amaru Shakur should be preserved for historical and governmental purposes." Not surprisingly, the bill has failed to attract a cosponsor.) It will be interesting to see whom they choose.
By Sonny Bunch
©