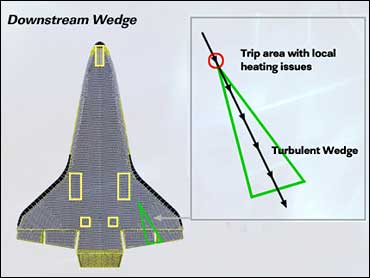 During the shuttle Discovery's high-speed plunge back to Earth, engineers will be collecting data from a unique experiment to understand exactly how airflow over the orbiter's belly transitions from smooth, laminar flow (which provides a thin layer of insulation) to the disturbed turbulent flow that can cause downstream temperatures to climb, possibly damaging a spacecraft's heat shield.

A single tile on the bottom of Discovery's left wing, about 10 feet behind the leading edge, features a quarter-of-an-inch-high ridge that will cause the insulating "boundary layer" downstream to go turbulent between mach 12 and 14.

That, in turn, will raise the temperatures of downstream tiles by 500 to 600 degrees Fahrenheit.

The tiles in that region of the wing normally experience maximum temperatures of 1,500 to 1,600 degrees when the re-entry airflow across the wing is smooth. During Discovery's entry, those tiles will experience a deliberate boundary layer transition to turbulent flow that will cause temperatures to climb as high as 2,200 degrees earlier than they normally would.

That will not cause any problems for Discovery or its crew. The aluminum skin of the shuttle under the heat shield in that area will only get 15 to 20 degrees warmer when the heat finally "soaks" into the structure after landing.

But the data will help engineers better understand the extreme environment of re-entry, which will pay off in the design of future spacecraft.

"It's an incredible opportunity for us to demonstrate how NASA is working to understand spaceflight better and apply what we learn," said Charles Campbell, the boundary layer transition (BLT) experiment's principal investigator.

Shuttle Program Manager John Shannon said the modified tile was mounted "in an area that has a lot of thermal margin; the tiles are very thick there. This tile is special because it has a bump in it. It's only a quarter-inch bump, but it's molded into the tile itself.

(NASA)
"Downstream of that tile (pictured left) in the airflow wake, we mounted nine thermocouples that can record the temperature. What we expect to have happen is that we will take that boundary layer from laminar to turbulent flow at a higher velocity than we typically would if we didn't have a bump. This adds to our understanding of how flow transitions from laminar to turbulent flow and then what type of heating rate you can have for that. ... Every time Discovery flies we will continue to use this special area that is instrumented."

During re-entry, the shuttle plunges back into the atmosphere at some 5 miles per second with its nose elevated to an angle of attack of around 40 degrees. As the shuttle descends, the thin air in front of the shuttle nose, belly and wing leading edges compresses and forms a boundary layer, a region just a few inches thick that resists further compression and provides a natural zone of insulation.

A smooth, laminar flow is critical for achieving boundary layer insulation during peak heating. The flow naturally goes turbulent at some point during re-entry as the shuttle's velocity decreases. But the longer it is maintained, the better. If the shuttle's surface is marred by a defect, causing the boundary layer to "trip" and go turbulent at higher speeds than normal, the disturbed airflow can bring much higher temperatures closer to the surface.

"Once you understand when you are tripping that flow and getting the higher heat rate, now you can use that, you can put different coatings on tiles, you can put different types of tiles downstream from that and mimic a lunar return or higher heat than a normal shuttle return would be and you can do materials testing on the underside of the vehicle in a real flight environment," Shannon said.

Along with data collected by downstream thermocouples, engineers also hope to collect infrared imagery from a research aircraft flying below the shuttle as it glides toward Florida.

"Our models show that around between mach 12 and 14 we would expect the trip," Shannon said. "It depends on what ground track you fly. Our typical ground track which has us coming over the Yucatan and the tip of Cuba into Florida, we tend to fly that one a lot, it would be over the Gulf of Mexico. So we will have to carefully stage the viewing aircraft to make sure they have a good view of the underside of the vehicle as it passes overhead.

"This first flight, we're going to see where it trips," he said. "I certainly don't expect it to trip any higher than mach 15 or 16. If it does, that would be great data. This one is a pretty conservative first step."

Extensive testing in an arc jet furnace that can simulate the re-entry environment, along with a detailed engineering analysis, showed the temperature increase for the aluminum airframe below the regions of interest will only change by 15 or 20 degrees by the time Discovery lands.

"Think about how long it takes your kitchen counter top to warm up when you leave the oven on," Campbell said. "It takes time for that heat to soak in to the countertop, just like it takes time for the heating on the orbiter surface to soak into the structure. And as a side note, yes, the aluminum structure stays thousands of degrees cooler than the tile surface - a pretty excellent insulation!"

Shannon described the temperature change as minimal, saying, "We have a lot of thermal margin in the tile area."

"Just because of the shape of the wing, the tiles are thicker in this area, they're almost three-inch-thick tiles," he said. "So we're not at all concerned about underside heating. We actually had to make sure the thermocouples would be able to sense the transition. ... So there's no risk to the shuttle for doing this. And it's a great test to understand, in a controlled manner, the flight environment for re-entry." 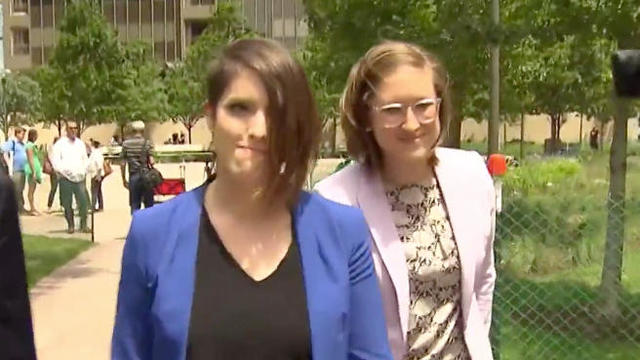