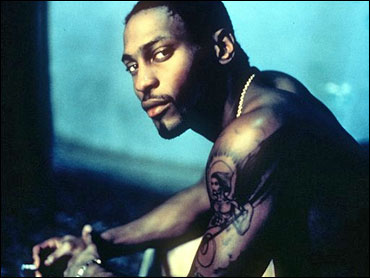 NEW YORK (CBS) D'Angelo has gotten into trouble for something police in New York say he was allegedly trying to get himself into.

Authorities say the Grammy Award-winning R&B singer-songwriter was busted for trying to pay $40 for sex with an undercover cop posing as a prostitute. Instead of getting a paid hookup, the singer was himself picked up - as police arrested him early Saturday while he was driving his Range Rover.

This isn't the first time D'Angelo has had a run in with the law.

In Jan. 2005, D'Angelo, whose real name is Michael Archer, received a three-year suspended sentence for cocaine possession, according to BBC News. That same year, he got his license suspended for 18 months on charges of marijuana possession and drunk driving (that's where the charming mugshot above comes from).

D'Angelo says he plans to fight the charge against him. A statement from his publicist notes that the singer has pleaded not guilty - and that it's hoped people will let the justice system resolve the matter before "jumping to any conclusions."

The neo-soul trailblazer and (former...?) sex symbol is due to release his third album later this year.