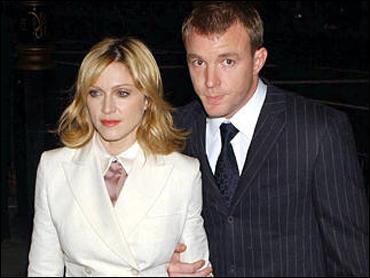 Madonna and husband Guy Ritchie swept away the competition at the Razzies, an annual spoof of the Academy Awards singling out the worst achievements in film.

"Swept Away," the island-romance bomb that starred Madonna and was written and directed by Ritchie, took five Razzie Awards on Saturday, among them worst picture of 2002.

Madonna tied for worst actress with fellow pop queen Britney Spears, who made her starring debut in "Crossroads," another worst-picture contender.

Ritchie was chosen worst director, while "Swept Away" earned Madonna a second award for worst screen couple with co-star Adriano Giannini. A remake of an acclaimed Italian film about a rich snob stranded with a hunky sailor, Madonna's "Swept Away" also received the trophy for worst remake or sequel.

Madonna was named worst supporting actress for her brief cameo as a fencing instructor in the James Bond flick "Die Another Day," for which she also sang the theme song.

"She's not even in the movie for two minutes, but she's so awful in that one scene, that for the whole rest of the movie, you cannot forget that your eyes and ears have been assaulted with the stupidity of her appearance," said Razzies founder John Wilson.

Madonna's latest Razzies bring her career total to nine, tying her with Sylvester Stallone for most awards ever. Three years ago, the Razzies also chose Stallone and Madonna as worst actor and actress of the 20th century.

Other Razzie 2002 "winners" chosen by about 500 members of the Golden Raspberry Foundation:

Worst original song: "I'm Not a Girl, Not Yet a Woman," "Crossroads."

Ritchie and Madonna were the first husband-wife Razzie recipients since John and Bo Derek, who were named worst director and actress for 1984's "Bolero" and 1990's "Ghosts Can't Do It."

Razzies founder Wilson said he always votes last and cast the ballot that tied Madonna and Spears for worst actress, though he would not say which he voted for.

"They are equally wretched," Wilson said. "They admire each other, and they can have each other."