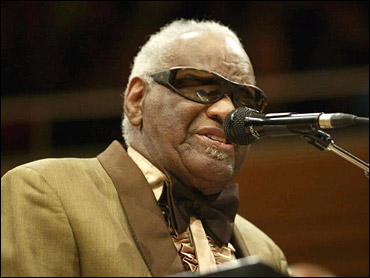 Ray Charles is recovering in his Beverly Hills home after undergoing a hip replacement last week.

"I feel terrific and am so thankful to the good Lord that all is going well for me," Charles said in a statement Tuesday. "I can't wait to get back on the road, which is my second home."

Acute discomfort in his left hip forced the 73-year-old singer in August to cancel his remaining 2003 tour dates. It was the first time Charles had canceled a tour in 53 years.

While hospitalized in November, Charles donated $1 million to Dillard University in New Orleans for the creation of a program about black culture. He's also been working on a duets album at his private studio, Digney said.

Charles, who was 7 years old when he lost his eyesight, has won 13 Grammy Awards, including a lifetime achievement award. He also was one of the original inductees to the Rock and Roll Hall of Fame in 1986.

He's recorded classic songs such as "I Got a Woman," "What'd I Say" and "Georgia on My Mind."

A movie based on his life story, "Unchain My Heart: The Ray Charles Story," starring Jamie Foxx, recently finished filming.