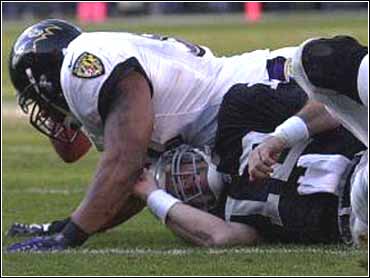 Ray Lewis and Tony Siragusa were fined a total of $17,500 by the NFL on Thursday for hits on quarterbacks in games the Baltimore Ravens won to reach the Super Bowl.

The 340-pound Siragusa was fined $10,000 for slamming Oakland's Rich Gannon to the ground in the first half of last week's AFC championship game, won 16-3 by Baltimore. Gannon bruised his collarbone and left the game, returned in the third quarter but was ineffective.

Lewis, the NFL's defensive player of the year, was fined $7,500 last week for hitting Tennessee's Steve McNair in the chest in the Ravens' 24-10 win the week before. McNair missed one series, then returned.

Neither hit brought a penalty on the field.