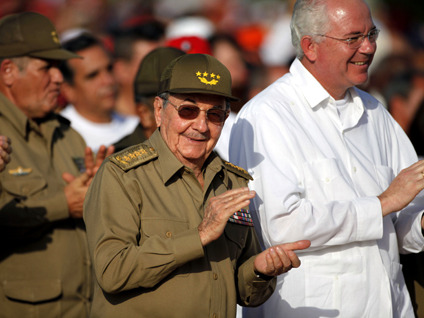 In a short speech to parliament Sunday, Cuban President Raul Castro said the country would tweak its economy but there would be no deviation from its socialist system. He said also that "in essence nothing has changed" in U.S.-Cuba relations.

In contrast with the situation during the eight years of the Bush Administration, Castro said, "there is less rhetoric and occasional bilateral conversations on specific and limited topics are held," but "in reality, the blockade [Cuba's terminology for the U.S. economic and trade embargo] continues to be applied."

He strongly criticized the United States for what he described as its violation of the human rights of five Cuban agents jailed for 11 years for spying. "The Five," as they are known in Cuba, are considered heroes, men who infiltrated anti-Castro groups in South Florida to prevent terrorist actions against the island.

Seeking to create jobs for about 1 million workers previously on state payrolls, the Cuban President told lawmakers that the government would allow more people to work for themselves. The Council of State has already decided, he said, to "broaden the practice of self-employment ...eliminating various existing prohibitions so as to grant new licenses and the commercialization of some production, taking a flexible approach to the hiring of labor."

His speech closing the National Assembly session was short on details.

The state controls about 90 percent of the island's economy. The areas in which people are allowed to work for themselves at present are limited. In the last year the government opened up possibilities in agriculture by turning over fallow land to individuals who agreed to farm the land in a nationwide effort to increase food production. During this period, barber shops and beauty parlors have also been turned over to their former employees.

Until now the law prohibited those working for themselves from hiring others. In practice, there are Cubans employing others already.

Castro said the Council of State earlier this month approved a new system of taxation to be applied to the self-employed, one that would be more in concert with Cuba's new economic situation. It is intended, he said, to guarantee those who work for themselves contribute to social security, pay taxes on their personal income, on sales, and those who hire others will pay taxes "for the use of the labor force."

As for who gets to keep their job and who gets nudged out, Castro said it would have to be done carefully to make sure the person best suited for the position is the one who stays, and to avoid favoritism playing any part in the decision.

Referring to the need to reduce the state's considerably overstaffed employment rolls, Castro touched on one of the problems facing the Cuban economy: the level of the population's dependency on the state's welfare largesse. The layoffs, he said, will take place in stages. The first will conclude in the first trimester of next year.

In that stage, he said, the government will modify the treatment and salary of workers who are dismissed from their jobs in the central State administration, "suppressing paternalistic approaches that undermine the need to work so as to live and with that reduce non-productive spending: wages that are the same no matter the number of years worked, guaranteed salaries for long periods for people who don't work."

Castro also touched on the Achilles heel of the island's faltering economy: low productivity. "Without the increase in efficiency and productivity, it is impossible to raise salaries, increase exports and replace imports, grow in the production of foodstuffs and in point of fact, to sustain the enormous social spending of our socialist system."

Nevertheless, Castro said, "No one will be abandoned to his fate." The socialist state will provide the necessary aid for a "dignified life." The caveat was that this social assistance would be for those "who really are unable to work and are the sole support of their family."

He said, "The notion that Cuba is the only country in the world where you can live without working must be erased for ever."

One problem facing the Cuban government is how to modify its welfare state, cutting popular benefits without losing support.

Cubans have become accustomed over the past five decades to free health care, free education through university, low rents, and a highly state-subsidized food basket. Since the economic crisis of the 1990s when Cuba lost its main trading partners in Eastern Europe and the vast subsidies from the Soviet Union, Cubans have had to make due with wages that don't cover basic expenses; cheap rationed foods that don't last more than two weeks out of the month; high prices in farmers' markets; and even higher prices in convertible currency stores when they are paid in non-convertible Cuban pesos.

The two areas in which the Cuban state has job openings are agriculture and construction. Neither has great appeal to the highly educated population with aspirations to white collar jobs and higher standards of living, especially when both those areas require working under a blazing sun 12 months of the year. Employees in many state enterprises have been grumbling ever since the threat of layoffs appeared.

People will now want to hear what opportunities the overhaul of the economy will offer them. It remains to be seen if the openings to self-employment and small businesses will unleash the initiative and creativity needed to get the economy moving. There was no indication in Castro's speech that the government had any intention of changing its centralized economy or turning it over to market forces. On the contrary, he said the changes were being made to guarantee the survival of Cuba's socialist model.