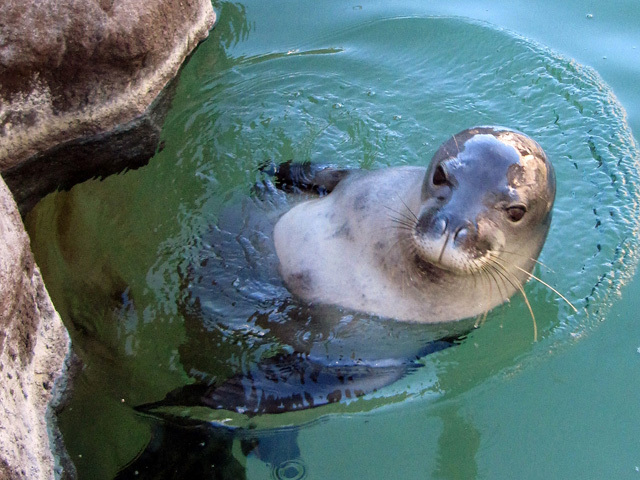 HONOLULU - Two Hawaiian monk seals were found bludgeoned to death on a remote coast of Molokai — one was killed in mid-November and the other shortly before Christmas. Earlier this month, a dead seal showed up on Kauai. A fourth possible killing on Molokai is also under investigation.

No one knows who is killing the seals — a critically endangered species — or why.

But the deaths are coming as the federal government steps up its efforts to protect the seals, leading to simmering resentment among some fishermen who fear new regulations will trample upon their right to fish. The killings are also happening as the misguided notion spreads that the animals aren't native to Hawaii and don't belong here.

"It's really serious. This attitude, this negative attitude toward the seals has overpowered the concern that this is a species that's going to become extinct," said Walter Ritte, a Molokai resident and longtime activist who has sounded an alarm about the killings.

Like pandas, the seals are adored by many humans for being cute, though their lazy demeanor and pudgy appearance belies the strength of a wild animal. Also like pandas, the animal is dangerously close to disappearing. There are only 1,100 left in the world, and scientists say the seal is on course to vanish in 50 to 100 years.

The National Oceanic and Atmospheric Administration last year proposed two initiatives to give the seals a better shot at surviving.

One would temporarily bring a few seals from the remote Northwestern Hawaiian Islands — where competition for food and predators mean only a dismal 20 percent of seal pups live to be adults — to the main Hawaiian Islands.

There aren't as many sharks to prey on seal pups, or large fish to compete with seal pups for food, around Kauai, Oahu, Maui and other places in the main Hawaiian Islands. This gives seals in this area, which is also where the state's 1.4 million people live, an 80 percent chance of living to adulthood.

Neil Kanemoto, a lifelong recreational fisherman, said he didn't know who was killing the seals. He pointed out the last person to be convicted of killing a seal, a 78-year-old man who shot a pregnant monk seal on Kauai in 2009, was not a fisherman.

But he said fishermen and locals are unhappy with the new regulations NOAA wants, and the agency wasn't doing enough to work with local people to manage the situation. People may end up taking out their frustration on the seals, Kanemoto said.

"The point is, don't shove this down people's throats," he said. "They're making it an issue, and as a result, the poor monk seal may — I'm not saying it is — may fall victim to repercussions from locals."

He said he wouldn't be surprised of if more seals were killed.

"It's not going to end. My position is, if the feds keep pushing in this way, it's going to increase," Kanemoto said.

Ritte said part of the problem was that older people, who didn't see many seals growing up or hear about them from their elders, are spreading the word that the seals don't belong in Hawaii.

A NOAA report released last year showed 35 percent of those surveyed at beaches and popular fishing areas on Kauai and Molokai believed the seals aren't native to the islands.

This is contradicted by archaeological digs that found monk seal bones in a human trash pit dating between the 15th and 18th centuries. The Hawaiian creation chant, the Kumulipo, also mentions a creature like a monk seal — "a rat running beside the wave."

By the early 1900s, however, most monk seals in the main Hawaiian Islands had been hunted and killed for their meat and fur. Even until a decade ago, it was rare to encounter one in the main islands.

Ritte said the seals have been showing up regularly on Molokai, a rural island of just 7,000 people, for about the past seven years. They've started to compete with subsistence fishermen who are already catching less because pollution runoff and overfishing have depleted fish stocks in the area.

The issue is serious on Molokai, where the unemployment rate hovers over 15 percent and where people get one-third of their food from hunting, fishing, and gathering.

"So here you have a fisherman. He's been walking two to three hours to get to his fishing grounds over rough terrain. And then he runs into these seals. And it causes him to get only half his catch and a quarter of his catch," Ritte said. "I think that is the essence of why."

He said the NOAA's proposals are making things worse.

NOAA says moving a few seals to the main Hawaiian Islands was the only feasible and effective way to address the high mortality rate for seals in the Northwestern Hawaiian Islands. Further, it says critical habitats aren't intended to prevent public access to beaches and oceans. The agency says it wants to continue talking to fishermen and to address their concerns.

Ritte believes no one would kill the seals if they understood the animals have been in Hawaii for millions of years.

He said the state and federal governments and environmentalists need to get the word out quickly that the seals belong here. Usually he would say everyone should focus on educating the children, so they'll grow up knowing better. But he said that approach may not work this time.

"I don't think we have that luxury because the seals might be gone by then. So we need to hit this generation. That's going to take a lot of effort," he said.

William Aila, the head of the state Department of Land and Natural Resources, said the state was preparing a monetary award for information that leads to the conviction of those responsible. He said the department would also link its website to a page with information on the deep roots monk seals have in Hawaiian tradition.

"We have a responsibility to do our part to help this species recover," he said.