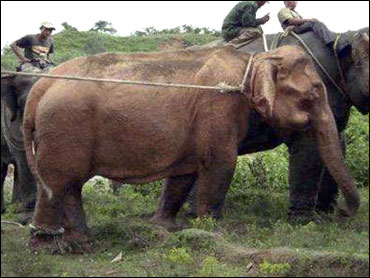 A rare white elephant has been captured in the jungles of northwestern Myanmar, a mostly Buddhist country where the animals are considered good omens, state media reported Tuesday.

Forestry officials found the animal Saturday, acting on a tip, in the jungles of Maungdaw township in northwestern Rakhine state, the New Light of Myanmar reported, describing the elephant as about 38 years old and 7 feet and 4 inches (2.2 meters) tall.

White elephants, actually albinos, have for centuries been revered in Myanmar, Thailand, Laos and other Asian nations. They were normally kept and pampered by monarchs and considered a symbol of royal power and prosperity.

The elephants are not necessarily white. They can look similar to other elephants except for certain features like fair eyelashes and toenails, light-colored hair or a reddish hue to the skin.

The newspaper did not say where the elephant would be housed. It will be the fourth white elephant held in captivity in Myanmar. The three others are at the Mindhamma Hill park, in suburban Yangon, where they live in an enclosure with spiraled pavilions, a manmade waterfall, ponds, trees and vegetation.

Soraida Salwala, of the Thailand-based Friends of the Asian Elephant Foundation, said the group normally objects to placing elephants in captivity but stopped short of criticizing the capture of white elephants. In Thailand, all white elephants are traditionally handed over to the country's revered king.

"The white elephant is a sign of great blessings and fortune for the land," she said, adding that traditional Myanmar and Thai beliefs are similar on the subject.

Previous white elephants transported from the jungles have been heralded in lavish ceremonies where the Myanmar's military leaders sprinkle them with scented water laced with gold, silver and precious gems.

A war was fought in the 16th century between Thailand and Myanmar, then Siam and Burma respectively, over disputed ownership of four white elephants.