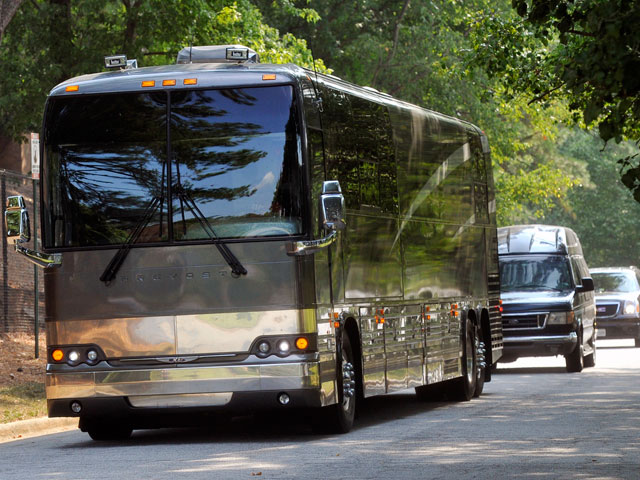 (CBS/AP) ATLANTA - After only one day of freedom, Grammy-winning rapper T.I. is back in jail and apparently it's his bus that's the problem.

The artist's lawyer says federal officials objected to the use of a luxury tour bus that transported T.I., real name Clifford Harris, to an Atlanta halfway house Wednesday.

The 30-year-old rapper was released from a federal lockup in Arkansas on Wednesday and made the 375-mile trip to Atlanta in a luxury motor coach.

CNN reports that T.I. was in a U.S. Penitentiary in Atlanta Friday, according information posted in the Bureau of Prison's online inmate locator.

His attorney, Steve Sadow, told The Associated Press late Thursday that federal officials moved T.I. because of an issue involving his transportation to Atlanta. According to CNN, Sadow says officials are reviewing whether riding the tour bus, which was escorted by private SUVs, violates Harris' furlough agreement.

T.I. had been serving time for violating probation in a weapons case.

Soon after his release T.I. posted on Twitter, "The storm is over & da sun back out. IT'S OUR TIME TO SHINE SHAWTY!!!!! Welcome to the beginning of our Happy Ending!!!!"

The popular hip-hop artist had begun filming a new VH-1 reality TV show as soon as he stepped out of prison and onto the tour bus.

VH1 said Wednesday that the network will film, "T.I.'s Journey Home from Jail" and debut the show in December.