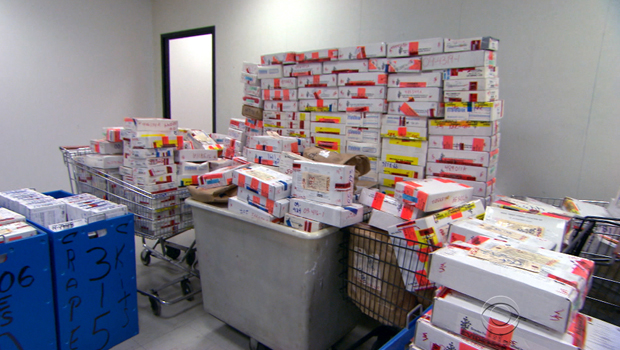 CLEVELAND - It is shocking that just three percent of rapists in America ever serve time.

CBS News reported five years ago that investigators often ignore DNA evidence collected from victims in what is known as a "rape kit."

Thousands of these rape kits have gathered dust for years.

Stories such as ours persuaded some police departments to begin testing them.

Charles Steele raped at least four Cleveland women in the mid-'90s. One was at a gas station when he walked up.

"And I looked up, next thing I know I have a gun pointing at me," one survivor said.

But her case and all the others went unsolved for 20 years because police never tested the DNA rape kits that were administered when they were attacked.

When CBS asked the Cleveland Police Department back in 2009 how many untested rape kits were sitting on their shelves, a lieutenant said he didn't know and wouldn't count.

"We realize what our mistakes were," said Cuyahoga County Prosecutor Tim McGinty. "We're not going to make them again."

When McGinty took office three years ago, he responded to a call from Ohio's attorney general, Mike DeWine, to start testing all rape kits with state funds - 4,200 kits in Cleveland alone. The results astonished everyone.

"The rape kits are the gold mine for law enforcement," McGinty said.

"They don't stop raping until they're dead or they're physically unable to get out of bed and go attack somebody," said McGinty. "So the sooner you empty your shelves of the rape kits, the sooner you can take the serial offenders and serial rapists off the street."

Two hundred of them have already been indicted. Almost a third are accused serial rapists.

And that's just from testing half of Cleveland's backlog.

And yet many other major cities are moving slowly, if at all.

According to the Joyful Heart Foundation, which works to end the backlog, Las Vegas only tests 16 percent of its kits, Seattle, 22 percent, and Tulsa, Oklahoma, is seeking funding to test 3,400 kits.

That's just a sampling, so there's a lot of DNA evidence out there that could be used to catch rapists but isn't.

The following figures on untested rape kits below are from the Joyful Heart Foundation. Here are responses from police departments contacted by CBS News.

The Seattle Police Department has 1,276 untested kits in storage. The following statement is from Sgt. Sean Whitcomb, the department's public affairs director:

"When our detectives investigate reports of sexual assault and corresponding sexual assault kits are available that will support criminal prosecution, we will have them tested by the Washington State Patrol crime lab."

The Las Vegas Metropolitan Police Department has 4,385 untested kits in storage. This statement is from Kimberley Murga, director of laboratory services at the department.

The Wisconsin Department of Justice has surveyed every law enforcement agency in the state to find out how many untested kits exist statewide. Their results show over 6,000 untested kits statewide. Now, the state is in the process of figuring out the next step with the kits. The following statement is from Dean Stensberg from the Wisconsin Department of Justice:

"Now that the universe of untested and stored kits is known both in number and location, the next step is for the Attorney General's Statewide Sexual Assault Response Team to inventory and triage the untested kits to establish a protocol for disposition and handling. Not all untested kits are the same. Informing this will be whether:

During this period, samples will be held in their current locations while the inventory and triage is underway.

Importantly, going forward all kits that have a victim cooperating with the prosecution will be immediately forwarded to the State Crime Laboratory. And, those kits from victims who have not yet decided whether to participate in the criminal justice system will also be forwarded to the State Crime Laboratory and stored for 6 years. This will avoid a similar situation from occurring in the future mindful of the victim's decision making and options."

The Tulsa Police Department has an estimated 3,400 untested kits in storage. The department is seeking federal funding to address their backlog. The following statement is from Officer Jillian Roberson, public information officer for the department:

"The Tulsa Police Department is working in partnership with Joyful Heart Foundation in developing a plan and funding for the untested kits. At this time the plan is not finalized however we continue to work together toward this common goal of reducing the number of untested kits."